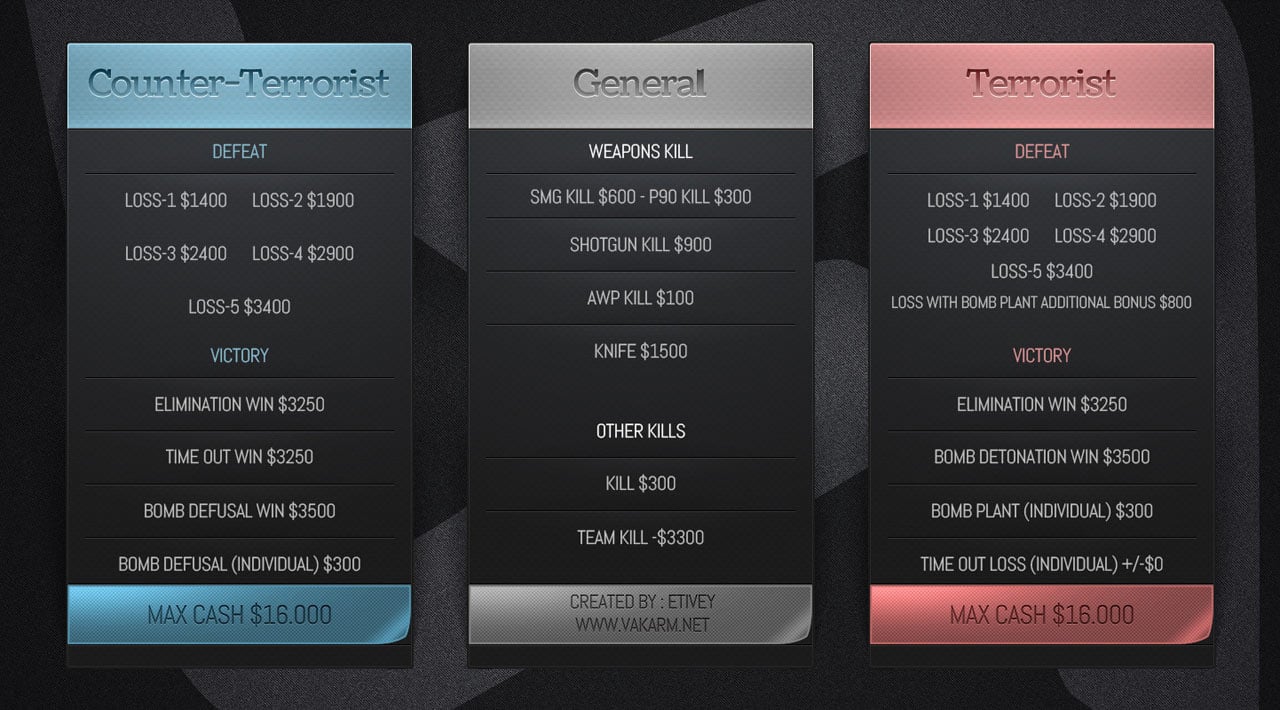 “The economy game” has been an integral part in the Counter-Strike franchise, including CS:GO, and allows teams to snowball multiple rounds, by forcing the opposing team on an eco. However, there has been an interesting trend in the past couple of months: the meta has changed from total CT dominance to a way more T-sided meta, and I think the economy is one of the main reasons, if not the main reason why the meta has changed.

Explaining the meta shifts from an economic perspective:

Around Faceit S2 lan finals-dreamhack winter era many would say that the meta has reached it’s CT side “peak”, meaning all maps where CT-sided, with teams expecting at least 11 rounds on maps that were historically balanced, like inferno or even 12-13 rounds on maps like Nuke or Overpass. Nowadays however a scoreline like 9-6 for the CT’s  on inferno and overpass or even 8-7 for the T-side on maps like Dust 2 is considered normal, so what has changed?

What is interesting is the fact that there was only one change in the weapon prices, and that was the price change of the M4A1-S from 2900$ to 3200$. Now, it does not sound like a big deal, but in reality it is because the CT’s never had the better primary weapon. The M4A1-S was compared to the AK more expensive(2900 against 2700) and also weaker(1 headshot against armor doesn’t kill, compared to the ak) but it wasn’t enough to stop the ct side from dominating the game, because of how the maps themselves were CT-sided. However, since the price changes, it is much harder for the CT-s to actually make a “bank”, as buying a m4-a1 + armor costs 4200, which is more than you get from winning a round, while on the t-side an ak-47+ armor costs 3700, meaning that it is much easier to break the CT’s  economy compared to the T’s, and remember, you are paying for an inferior weapon.  The T’s  also get a 800$ money bonus if they plant the bomb and lose, compared to the CT’s. It gets even trickier if you add the grenade costs: a Molotov on the CT side costs 600, while on the T side it costs just 400.

An overview of the economy:

Which leads to a strange situation: imagine the T side stringing together 6 rounds in a row, and having a terrorist on 16000$ and full loadout. Now, even if they were to lose all the remaining nine rounds they will get 3400$ after 5 rounds lost, which is almost enough for an ak and armor(3700$). Of course, assuming the T side can’t get a bomb plant, as it would give an additional 800$, meaning it is almost impossible for them to be forced to an eco anymore, unless they buy AWP’s.

So what happens with the CT’s in this situation? Well, the 3400$ bonus after five rounds lost is nowhere near enough to buy an m4 and armor, as even if they would only buy body armor it would cost around 4000$, so they only have two choices: go for an eco and lose one round or force buy and risk losing two.

So let’s swap the roles. Assuming the CT’s won 7 rounds in a row and have 16000$ in the bank, after just four losses(even less if they buy any grenades) all the saved money would be lost, but the 5 round loss bonus is not enough for a full buy. On the other side, after five losses, the T side can theoretically buy as much as they want as long as they can get the bomb plant, as it would give 4200$, which is enough for an ak, armor and even some grenades, meaning they can keep pressuring the CT economy without having to worry about their own.

A very good example of this is the recent starladder S13 finals between Na’Vi and Envyus, on overpass:

To be honest, after watching most of the professional games since the meta has shifted a bit towards the terrorist side, most of the maps in which the T side gets a lead or does really well is not because of a new strategy that the CT’s haven’t figured out yet, but rather the terrorists clutching the rounds and forcing the CT’s to lose rounds by eco-ing or choosing to force-buy, which is not exactly what one would call “balance”.