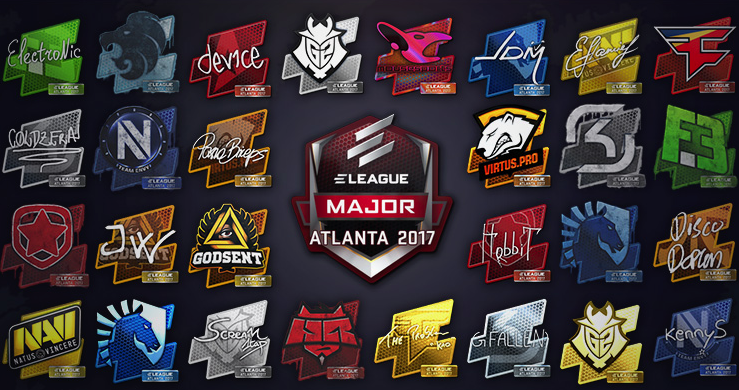 Stickers for the ELEAGUE Major in the coming weeks have been released to the public in a recent Valve update. For $0.99, Counter-Strike players can either directly buy the team’s sticker or buy the team’s Legend or Challenger sticker pack for a chance at getting their favorite player’s sticker. In this Major’s sticker showcase, stickers are available in traditional, foil and holographic (Holo) editions.

Another big addition to 2017’s first Major is the introduction of team graffiti sprays. Fans can now vandalize Valve’s maps with graffiti to their heart’s content (at least, for 50 sprays). This is the first introduction of new sprays into Counter-Strike: Global Offensive since their inception in October.

The Atlanta 2017 Team Pick’Em Challenge is now also available for players to earn in-game trophies based on their winning picks. For the group stage, pickers can choose teams that will go either undefeated (3-0) or eliminated without winning a match (0-3) in the Swiss Format stage. Eight teams advancing out of the group stage and into the playoff bracket must be selected, then from there, playoff picks may be chosen. Once they’re chosen, they’re locked in for good once the playoffs start.

Here is how the point-reward and trophy system will work:

Unfortunately, stickers from popular teams such as Cloud9 and Ninjas in Pyjamas will not be available because they failed to qualify for the major. On the bright side, stickers from teams such as North and GODSENT are included for the first time ever. These could be considered rarities in the near future if North see’s good fortune in the Major, as this is North’s very first event as an organization since its inception earlier this year, and if GODSENT fails to qualify for the next major. HellRaisers’ stickers have also made a return from a two-year hiatus since their last major was ESL One Katowice in 2015.

What do you think ELEAGUE’s first set of Counter-Strike stickers? Tell us your thoughts below or with a tweet @GAMURScom