The newest kid on the Call of Duty block, Black Ops Cold War, went live on Nov. 13. While each year’s multiplayer improvements push the game to a better place than it was a year ago, the campaign mode has remained a nice-to-have feature when it comes to the CoD series. Black Ops Cold War goes against the narrative on this one, though, since it packs a thrilling campaign mode that will take you on a journey.

You’ll be working day and night to stop Soviet soldiers from achieving their goals during the Black Ops Cold War campaign, but you’ll have a lot more to do in addition to the classic running and gunning down missions. Some missions, like Operation Chaos, will require you to channel your inner detective since you’ll be working with clues. Solving mysteries and identifying suspects will be your primary goal when you’re using the evidence you’ve gathered throughout the campaign.

If this is the first time you’re hearing about pieces of evidence, chances are you may have moved on with the story without collecting them. They’re relatively easy to miss if you don’t check out every little detail around the scenes, and even then, you’ll need to know where to look for them.

The following list will help you track down all the evidence hidden inside the missions. If you’ve missed any of them, you don’t have to worry because you’ll be able to replay missions to collect each piece of evidence.

Here’s all the evidence you’ll need to complete missions like Operation Red Circus and Operation Chaos.

Evidence No. 1 – Nowhere Left to Run

Not all the evidence has to be a hard copy of an intel. The most valuable ones will always come from informants and you need to have people skills to get it out of them.

During the Nowhere Left to Run mission, you’ll find yourself chasing down a person named Qasim Javadi. While it may be tempting to throw him off the rooftop as you catch him, you’ll need to hold your horses.

Javadi has some valuable information that will serve as evidence later in the game and a certain level of social engineering will be required to make him talk. Just make sure that you ask the question, “Who’s Arash meeting with?”

The answer to that question will yield you a coded message. You can then either spare him, capture him, or throw him off the edge. 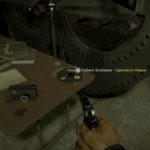 The Brick in the Wall mission is unique since you’ll come across two pieces of evidence as you’re playing it through.

The first one will be tied to an optional objective that requires you to find a captured informant named Richter. Keep following the objective that will lead you to Richter and make your way down to the basement.

The second piece of evidence you’ll come across in Brick in the Wall is in Kraus’ home. Go up the stairs after welcoming yourself inside, but don’t pick up his briefcase to complete the main mission since this will make you progress through the mission.

Make your way to Kraus’ bedroom. Look for the cabinet next to his bed and open the drawers to collect the evidence. Once you collect the ledger he’s been hiding, you can go ahead and progress through the Brick in the Wall mission.

An optional objective during the Redlight, Greenlight mission requires you to take a picture of six pieces of intel. Capturing three of them will still be enough to unlock the evidence, however.

To take a picture of the first intel, you’ll need to slide down the bank and make your way to the guard hut. It’ll be hung over a wall. Taking a picture of it also will prompt you with a progress tracker.

You’ll need to get into the base and head downstairs after clearing the guards. The intel will be waiting for you inside a room on the left that has a bank door with a valve.

For the third piece of intel, navigate to the fake town and go to the ’80s bar next to Capital Savings. The intel will be in the upstairs portion of the bar.

Taking a picture of each intel will unlock the evidence for future use, but you can continue to watch the video guide to locate the remaining pieces of intel.

Evidence No. 5 – Echoes of a Cold War

You’ll spend a good chunk of your time fighting while making your way into this command center. As you get closer to the base, you may notice an audio recording playing in the background.

The sound will be originating from the table located in the center of the room and you can grab the tape off it. This tape recording will help you later in the Operation Red Circus mission. 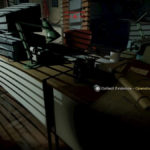 The evidence piece buried inside the Desperate Measures mission is one of the trickier ones since it has a chance of moving each time you load the mission. You’ll be looking for a wristwatch, which we found in the Records room. The watch containing a dead drop list can also be found in the other areas of the KGB headquarters, but it’ll most likely be on desks—and it’s quite hard to miss it.