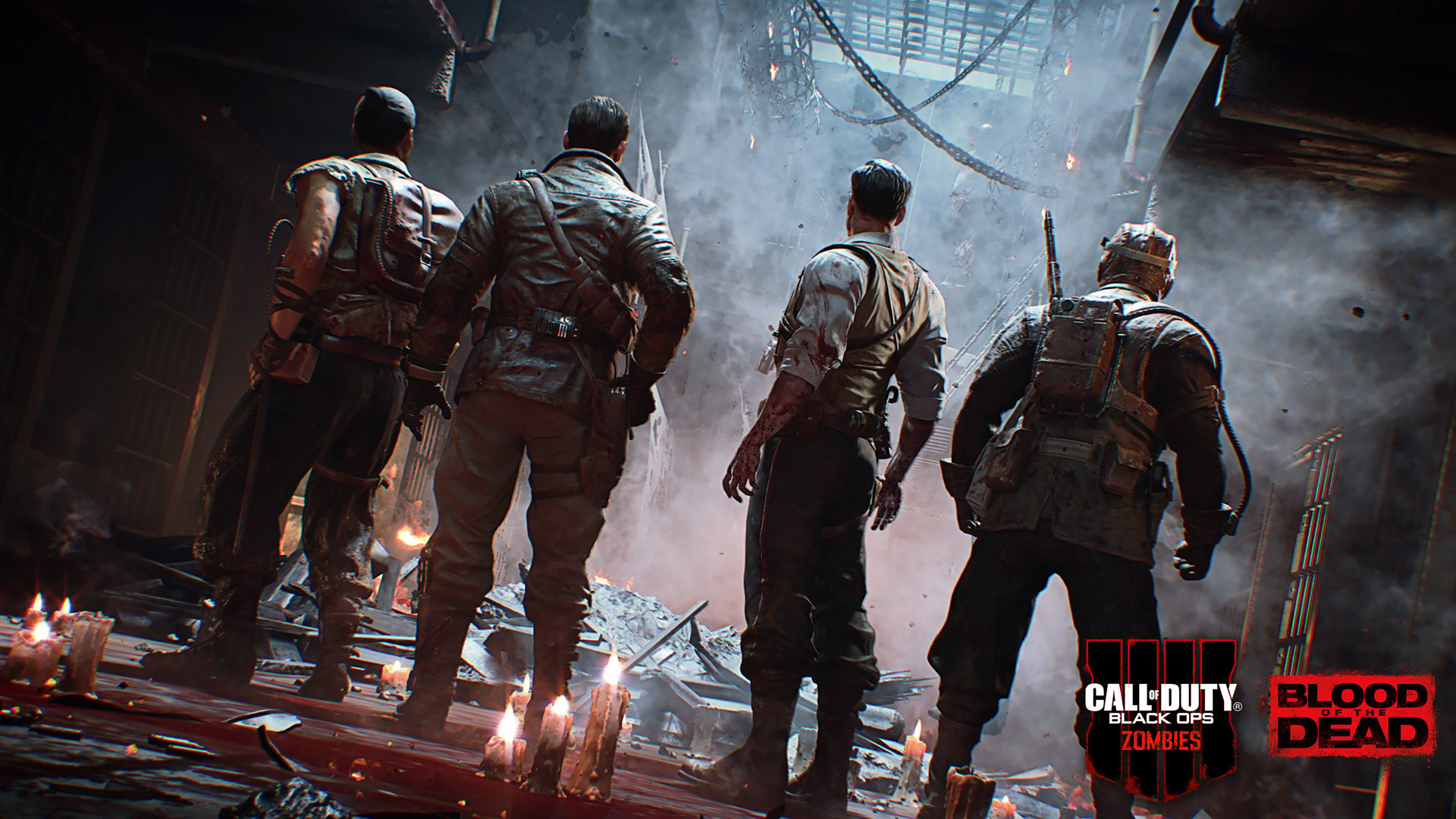 The latest installment in the Call of Duty franchise is now available, which means that Zombies fans have some great new maps to play. But one of the biggest hits in Call of Duty: Black Ops 4 is Blood of the Dead, a remastered version of the fan-favorite Zombies map, Mob of the Dead.

Blood of the Dead is much more than just a remake of the previous Zombies map from Black Ops II, however. It features completely new areas to explore, unique guns (and wonder weapons), and a thrilling Easter egg.

But this map is no joke. Blood of the Dead will test every ounce of your zombie-slaying abilities if you hope to make it to the high rounds. Here’s what you’ll need to acquire or unlock in-game to survive in Blood of the Dead.

The zombie shield in Blood of the Dead is called the Spectral Shield—and it’s incredibly important for your success on this map. You’ll need to locate three parts spread across the map to build the shield.

The first part is a blue essence that will be located on one of three old Afterlife electric boxes from Mob of the Dead. If you’re using the in-game location names in the top-left corner of your screen, these electric boxes can be found near the Cafeteria, Library, and Michigan Avenue.

The second part is the metallic door that makes up the majority of the actual Spectral Shield. This part can be found along the inner walls as you progress down the Citadel Tunnels, perched against a door at the end of the Citadel Tunnels staircase near a pile of skulls, or next to a window in China Alley.

The third and final part of the shield is the Warden’s Key. You’ll get this key after you kill the boss zombie Brutus for the first time. Once you’ve collected all of these parts, you can go to one of the many workbenches on the map and build your Spectral Shield.

The Spectral Shield is rather unique compared to other shields in previous Zombies maps. Equip the shield by pressing L1 (on PlayStation 4). If you hold down R2, you’ll bring out the Warden’s Key and you can drain zombie souls to charge up a Spirit Blast. And if you hold down L2, you’ll get a spectral view that can be used to see previously-unseeable objects around the map. If you have any aspirations of making it far in Blood of the Dead, you definitely need to build the Spectral Shield as soon as possible.

The Hell’s Retriever isn’t as vital as the Spectral Shield, but it’s definitely helpful. This sweet tomahawk returns from Mob of the Dead as a way to quickly kill zombies and grab unreachable objects around the map.

To build the Hell’s Retriever, you’ll need to feed the three bodiless dogs spread throughout Blood of the Dead. The dogs are located in New Industries, Cell Block Second Floor, and Eagle Plaza.

In order to feed these dogs, you have to kill zombies in front of them. But the dogs will only eat one zombie corpse at a time—so you’ll have to be patient and run around while the dog is having its meal.

Once you’ve fed all three dogs enough zombies so that they disappear, you simply need to travel underground to grab the Hell’s Retriever. There are a few portals that you can take to go underground, but if you go to each dog spot in the order listed above, you’ll be near the gateway in the Warden’s House after feeding the third hound. Spend 500 points to travel through the portal, and as you’re moving, you’ll see the tomahawk sitting on top of a rock. Just hold Square to pick it up and you’ll now have the Hell’s Retriever.

You can also upgrade the Hell’s Retriever into the Hell’s Redeemer, but that’s not absolutely necessary for your survival on Blood of the Dead. The basic form of the tomahawk will work just fine if you’re in a pinch and need to clear out a path by quickly killing a few zombies.

The Blundergat, a wonder weapon from Mob of the Dead, makes its return to Call of Duty Zombies in Blood of the Dead. It’s a powerful shotgun that every player should have in their inventory if they want to make it to the high rounds on this map.

You can get the Blundergat from the Mystery Box—but like most wonder weapons, it’s not the easiest gun to acquire in this way because of its rarity. There is a way to get a free Blundergat once per game, however.

The skulls are located in the following spots:

Once you’ve collected all five of these skulls, your free Blundergat will be waiting for you on the desk in the Warden’s Office. You can also upgrade your Blundergat with the Acid Gat Kit or turn it into the Magmagat, which is one of the best weapons in Blood of the Dead. We strongly recommend getting the Magmagat if you want to survive for a long time in Blood of the Dead.

The Pack-a-Punch machine is an essential part of most Zombies maps since it allows you to upgrade your regular weapons and make them more powerful. This hasn’t changed in Blood of the Dead—and it’s actually pretty easy to unlock on this map.

To unlock the Pack-a-Punch, you’ll need to build the Spectral Shield and charge up enough zombie souls using the shield’s R2 key ability. Once you have your shield built and fully-charged, head up to the Roof where the Pack-a-Punch spot is located. When you’re on the Roof, simply pull out your shield and hit L2 to enter the spectral mode. Then, hit R2 to send out a Spirit Blast on the electric box to the right of the platform. And that’s it—once you’ve hit the electric box with your Spirit Blast, the Pack-a-Punch machine will spawn in.

In each game of Blood of the Dead, Brutus will spawn on the Roof after you initially create the Pack-a-Punch machine. But if you have an upgraded weapon, you should be able to take care of this boss zombie rather quickly. The Pack-a-Punch can move around to other locations, however, but it’s pretty easy to find.

Blood of the Dead is a fantastic Zombies map, and all four of the components in this survival guide are essential to making sure you get to the highest round possible.