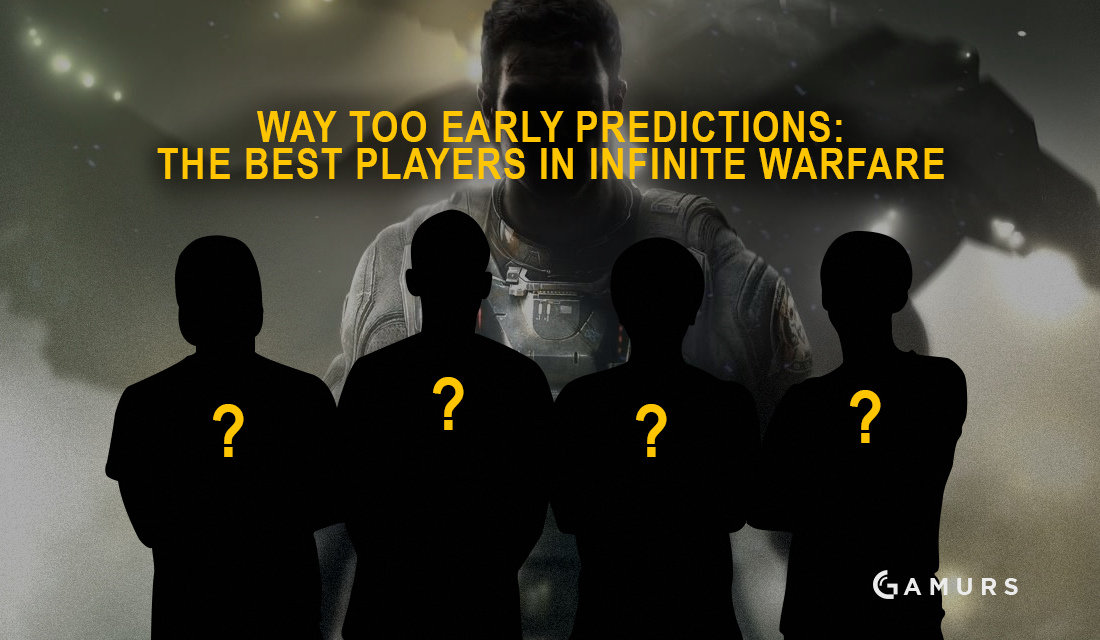 Roughly one week ago, Call of Duty®: Infinite Warfare was released to the public. Despite the constant bickering and complaints about the game’s mechanics, or the game as a whole, nothing is going to change the fact that Infinite Warfare will be played competitively in the Call of Duty World League.

While it might be way too early to tell exactly what the official CWL ruleset (including maps, game modes, etc.) will look like once the league kicks off, it’s never too early to make some fun, yet informative, predictions about what this year of Call of Duty action has in store for us.

As “RosterMania” has gone into full effect following the release of Infinite Warfare, many fans, including myself, have been pondering over what the competition is going to look like this year. Personally, I have taken great interest in trying to come up with my predictions for who I think will be the best players in Infinite Warfare.

As the title suggests, it’s way too early to make any definitive claims; also, as I previously stated, the game has barely been out for one week. Thus, it’s important to take what I have written below with a grain of salt. Six months from now, we could look back on this article and I’m sure there are going to be different names in the discussion for the best players in Infinite Warfare. However, as we have learned over the past few Call of Duty titles, new talent is rising rapidly, and every year provides many surprises.

One thing that I took into careful consideration when making these predictions is the weapons draft. While all the details are not known about this draft right now, much to the dismay of the pro players and community, it seems likely that this system will be implemented into Infinite Warfare to some degree.

Keeping this in mind, versatility is going to play a key role in this game. The more weapons that a player is able to succeed with, the more valuable they become to their team. Thus, I firmly believe that this year will be dominated by “flex players,” or the players who are able to put up big numbers with both a submachine gun and an assault rifle.

So, without further ado, here are my candidates for the “way-too-early” list of best players in Infinite Warfare.

While Colt “Havok” McLendon initially made a name for himself back in Call of Duty®: Advanced Warfare, he really started to burst onto the scene in Call of Duty®: Black Ops III. Most notably, towards the end of the year, Havok and the rest of compLexity Gaming were able to take down OpTic Gaming in their first match of the group stage at Call of Duty XP.

However, after Call of Duty XP, it seems like Havok really started to grow in this community, in large part due to his stream. While I have seen plenty of professional players streaming Infinite Warfare over the past week, it seems to me like Havok has been streaming the most. I could be wrong about this, but just from my perspective, it definitely feels like he has been streaming the most Infinite Warfare in comparison to other professionals.

While I have seen him take some time to stream and play Modern Warfare Remastered, as most pro players seem to be doing, unless they are playing in an Infinite Warfare tournament, I still feel that all of Havok’s hard work will pay off greatly if he continues to grind Infinite Warfare.

His Search and Destroy gameplay is spectacular, and this ability could greatly help him out on his new team. Surrounded by talented Search and Destroy players in Anthony “NAMELESS” Wheeler, Jeremy “StuDyy” Astacio and Jared “Nagafen” Harrell, this roster could be poised to be one of the best SnD teams in Infinite Warfare. If Havok continues to work hard in this game, and play as much as he has been, I can’t see any reason why he won’t be one of the best individual players either.

It wouldn’t seem right to make this list without considering the reigning Call of Duty XP MVP, Johnathon “John” Perez. John has been a mainstay in this community dating all the way back to his days with Team FeaR in Call of Duty®: Black Ops. Even back then, John was one of the most feared slayers in the game, and I don’t see that changing anytime soon. Black Ops III was definitely John’s best game, in terms of both statistics and achievements, and I think he will carry over that momentum into Infinite Warfare.

There are several different ways that I could see the weapons draft impacting John and Team EnVyUs. This team proved at Call of Duty XP that they are able to slay with all of the best teams in the world. Although that was on a different Call of Duty game, I also don’t think this fact will change heading into Infinite Warfare. With the weapons draft, EnVyUs could elect to give John the best gun in the game, since you want your best player to perform as well as possible. However, on the other hand, giving the best gun to another player could elevate their statistics and level of play. John should still be able to put up great slaying numbers without what is deemed to be the best gun, and it could help the team out overall if he is able to find success with another weapon.

Regardless of how EnVyUs elects to use John’s talents, this all comes back to versatility. John has proven that he can do great things with both an AR and SMG, so John’s versatility will be crucial during the weapons draft. Even though Infinite Warfare is a totally different game compared to Black Ops III, I still think that it’s hard to bet against John being towards the top on the list of players this year.

There’s no denying that FaZe Clan had a disappointing year following high expectations thanks to their run at the end of Advanced Warfare. But, this roster has stuck together, and I think Tommy “ZooMaa” Paparratto is a huge key to this roster’s success in Infinite Warfare.

Dating back to his days with Denial during Call of Duty®: Ghosts, ZooMaa was always considered a great all-around player. His aggressive style of SMG slaying made other teams uncomfortable as he had no fear about getting right in the face of the other team. But, this past year, ZooMaa and FaZe experimented with him using an AR, and he was quite good at that role as well.

This comes down to versatility once again. FaZe could choose to give ZooMaa the best SMG in the game and have him just run right at the opposing team, destroying anything in sight. Or, FaZe could elect to give him an AR, and provide cover for his teammates. FaZe could even allow ZooMaa to take a second-tier weapon in order to give James “Clayster” Eubanks the best AR in the game. Again, versatility is key, and ZooMaa’s ability to perform well with any weapon is going to be extremely important to FaZe’s success in 2017.

Last, but certainly not least, I think this man has been one of the most underrated players in Call of Duty over the past few years. It seems like Nicholas “Classic” DiCostanzo has been flying under the radar for far too long, even following a tremendous season with Rise Nation during Black Ops III.

Classic has proven himself as a top slayer, at least in my eyes. No matter what weapon you put in his hands, Classic finds a way to make plays. Following my trend of versatility in this article, I think that the weapons draft greatly benefits Classic specifically, as well as the rest of Luminosity.

I think that Luminosity will feel comfortable putting any gun in Classic’s hands, whether it’s an AR or SMG. I also think that the weapons draft will help Classic because in Search and Destroy, Luminosity will most likely turn to Sam “Octane” Larew for sniping duties. Thus, when Octane isn’t using the best AR in the game, Luminosity could allow Classic to draft that weapon.

All of these scenarios I’ve been saying are extremely hypothetical, as I can only predict what I think teams will do based on my many years of watching Call of Duty. But, in this instance, I think Classic has a chance to really shine in Infinite Warfare, in part due to his versatility and proven ability to produce huge slaying numbers with any gun in the game.

While I’m not going to go into as much depth for this list, these are players who I heavily debated about putting into the “core four” listed above. I felt that the longer the above list went, the less credible or meaningful it would be. Thus, here are my predictions for “honorable mentions” of the best players in Infinite Warfare.

Damon “Karma” Barlow is the epitome of versatility. He can play any role, with any gun on any map. This will be important for OpTic Gaming in Infinite Warfare, as Karma will most likely allow Seth “Scump” Abner to get the best SMG, Matthew “FormaL” Piper to get the best AR, and he will just fill in where needed.

Bryan “Apathy” Zhelyazkov is another extremely adaptable player who can go off at any moment. Apathy and John were both key contributors to Team EnVyUs following the conclusion of the first season of the CWL. While Apathy will probably stick to a main SMG role, his versatility will allow EnVyUs to mix things up quite a bit in order to keep their opponents off guard.

Ulysses “Aqua” Silva truly came into his own last year in Black Ops III, producing huge slaying power for Elevate. Now, making the transition over to Rise Nation, it seems like Aqua is in position to be the main slayer once again. I have big expectations for Aqua this year, and I expect him to prove me right and continue his top-three trend at CoD Champs.

Jeremy “StuDyy” Astacio is a highly talented player who can hang with the best of them. Again, he has proven over the years that he can use any weapon, especially a sniper. I think his sniper play in Search and Destroy will be key to his team’s success this year, because if he can draft and succeed with a sniper, it will enable the rest of the team to have the weapon of their choosing.

This article may be lacking several “big name players” in the Call of Duty scene, but as I mentioned earlier, anything is possible in Call of Duty, and these are just my “way-too-early” predictions.

Who do you think will be the best players in Infinite Warfare? Let us know by commenting below or tweeting us @GAMURScom.