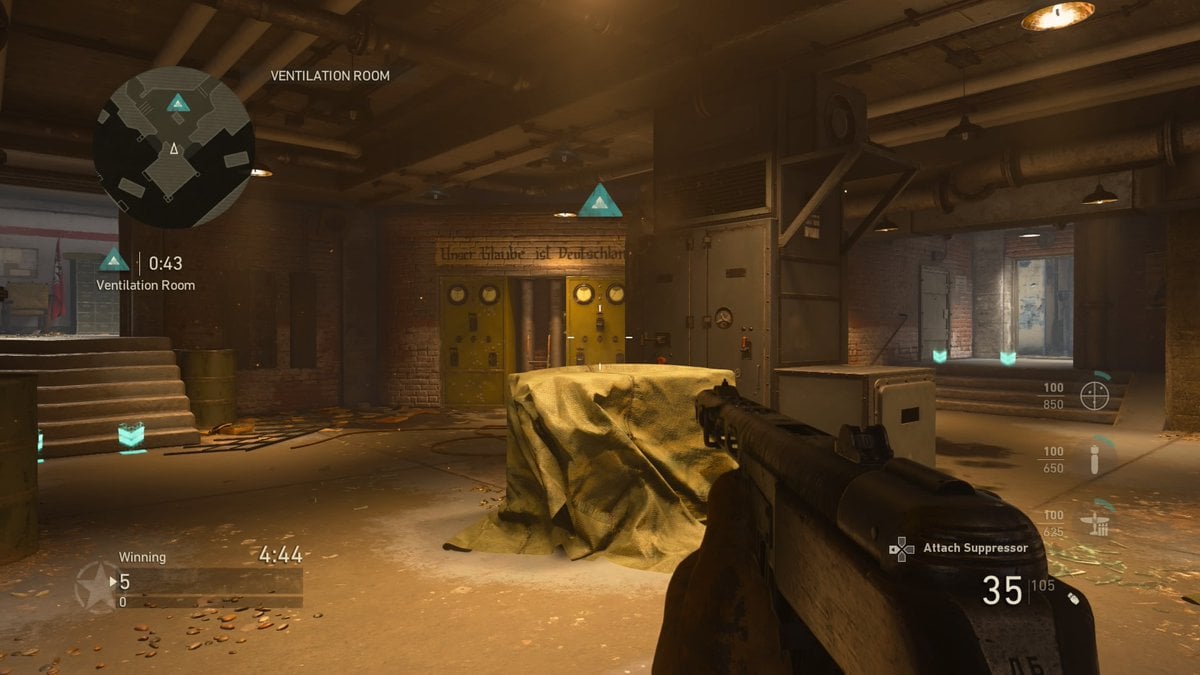 Last night, Rise Nation and Team Kaliber battled on Valkyrie Hardpoint as the map and game mode made its debut in the Call of Duty World League Pro League.

Although Team Kaliber surprisingly picked the map and mode combination during the veto process—despite the availability of Ardennes Forest Hardpoint, one of Kaliber’s best maps—Rise took the inaugural game of Valkyrie Hardpoint 250-202.

But there’s much more to this specific game than the final scoreline, especially since it was the first time that Valkyrie Hardpoint was seen in the CWL Pro League.

Before Valkyrie was even played, most fans had a general understanding that we’d see a lot of submachine guns on this small map. And that’s exactly what happened.

Kaliber used a four-SMG composition for the majority of the map, even putting main assault rifle player Lamar “Accuracy” Abedi on a PPSh-41. Rise Nation, on the other hand, ran three SMGs while Anthony “Methodz” Zinni, the team’s main AR, used a BAR.

The first Hardpoint, Ventilation Room, is extremely scrappy—as is the case with the first location on most Hardpoint maps. With four different entrances, players were continuously flooding into the hill from multiple angles.

In general, it seemed like most of the Hardpoints on this map were closely contested—Rise and Kaliber were within 20 points earned on four of the five Hardpoint locations. But this is likely due to the map’s small size and the aggressive nature created by SMG-heavy team compositions.

Rise held the biggest advantage over Kaliber in the third Hardpoint, Storage, especially during the first rotation. Methodz sat in the hill with an AR while his three SMGs pushed out other parts of the map, which helped Rise build an early lead.

It also seems like the fifth Hardpoint, Smokestacks, could be one of the most action-packed hills in WWII. Teams that get control of the back side of this Hardpoint spawn extremely close to Smokestacks, which means that they can quickly get back into the hill after dying.

But even though these spawns can be very beneficial, they can also lead to a team’s demise, as seen at the end of this game. Rise got control of Smokestacks from the front, so they knew Kaliber were spawning in the back. Methodz rained fire down from the sky with his Fighter Pilot while the rest of his team focused on the Kaliber players inside of Map Room as Rise collected the final seconds of hill time to win the game.

We’ll continue to learn new spots and tactics for Valkyrie Hardpoint as the map is played more frequently in the CWL Pro League. But for now, it seems like CWL fans can expect Valkyrie Hardpoint to be a hectic map with a lot of aggressive SMGs and high kill totals—Rise and Kaliber combined for 215 kills on this map last night, even though nobody on Kaliber had over 26 frags.

With the initial Hardpoint game on this DLC map out of the way, fans will now patiently wait for the first showdown on Valkyrie Search and Destroy as the CWL Pro League resumes tonight at 4pm ET.