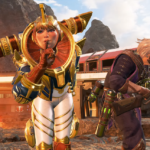 Apex Legends is going on a trip down memory lane. This week, players can dive into the returning Armed and Dangerous limited-time mode as part of the September Soiree. Skins from the 1920s-themed Grand Soiree will also make a short-lived return to the store until Sept. 22.

Armed and Dangerous removes assault rifles, SMGs, LMGs, and pistols from the rotation. Only snipers and shotguns spawn on the map and replicators are likely disabled. The mode first made its way to Apex with the Voidwalker event last September.

The Grand Soiree skins will also make a limited-time comeback for the week in the store, with a series of bundles for visuals and Apex packs at different prices. The art déco-inspired cosmetics were introduced in January and dress the legends in visuals inspired by the Roaring Twenties. Returning skins for Octane, Pathfinder, Wattson, Bloodhound, and Bangalore are in the shop. Players can also acquire new visuals for the R-99, G7 Scout, Hemlok, and Spitfire.

Most of the returning cosmetics are available in the Grand Soiree bundle, which contains five legendary skins and three rare visuals for 6,000 Apex Coins. Individual sets are also in the store for Pathfinder and Wattson, going for 2,500 coins each.

Players who are looking for loot boxes can get the legendary bundle, which contains a legendary Pathfinder gun charm, a legendary Apex Pack, and seven normal packs for just 700 Apex Coins. Those who want to grind their heirlooms, however, can try their hands at the 20-pack for 1,400 Coins or the 100-pack set for 7,000 Apex Coins. Lastly, the Viceroy Bundle is the only way to get Bangalore’s Grand Soiree skin, two legendary Apex Packs, and 45 common packs for 4,000 coins.

The September Soiree has more in stock for players. The event runs until the first week of October and will bring in another two limited-time modes: DUMMIEs Big Day and LIVE. DIE. LIVE, according to data miner Shrugtal.

DUMMIEs Big Day was the first mode in the September Soiree, but Respawn removed it from the rotation after uncovering a game-breaking bug that caused server crashes. The LTM lets players dive into the Apex Games using the dummies from the Firing Range instead of the actual legends.

LIVE. DIE. LIVE. is reportedly returning to Apex to give Respawn Beacons a break. In this mode, players will revive on their teammates after the end of each round—and as long as one squad member is alive, the team can get back on their feet.