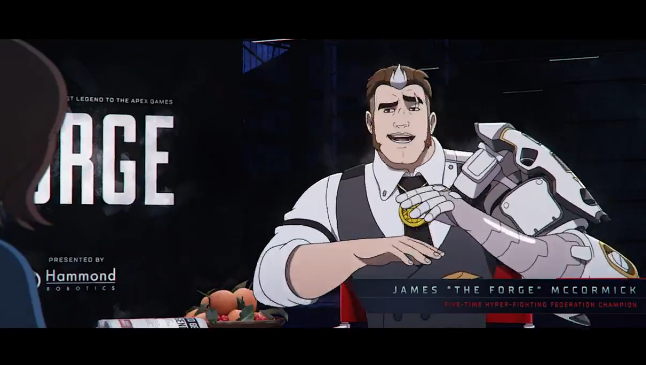 Ding dong, Forge is dead—or at least that’s what Respawn wants us to believe.

Today’s short Apex Legends teaser hinted at Revenant’s season four debut after he stabbed Forge in the back during an interview with Outlands TV. But the community isn’t buying it. A quick gander at the Apex and ApexLore subreddits yields several fan theories that argue against Forge’s abrupt death.

One picture circulating the subreddits suggests that the Forge from the trailer was an impostor set up to take the fall. The description on Forge’s commemorative weapon charm, found in the legend’s deathbox, explains that he was “often imitated but never defeated.” This led fans to compare the champion’s banner to his appearance in the trailer.

The alleged Forge impostor has a scar on his eyebrow, but no scars on his arms, and what appears to be brown eyes. This differs from Respawn’s Forge concept art, where the brawny champion has no scar on his eyes, several on his right arm, and green eyes.

Another fan pointed out that Forge’s bio (which has been taken down and replaced by a memorial message) described him as “confident yet humble.” The fan believes he was anything but humble in the trailer, acting cocky and arrogant during his interview. This would further hint at an imitator going to the Outlands TV set in Forge’s place.

Assuming Forge really was being interviewed and stabbed by Revenant, fans have a theory for that, too. One player thinks that Forge will come back as a simulacrum or robot, especially with Hammond Robotics supporting the legend to compete in the Apex Games.

Though Respawn’s official stance might be that Forge is dead, the company has bamboozled us before. But Apex fans are trying to make sure that won’t happen again.