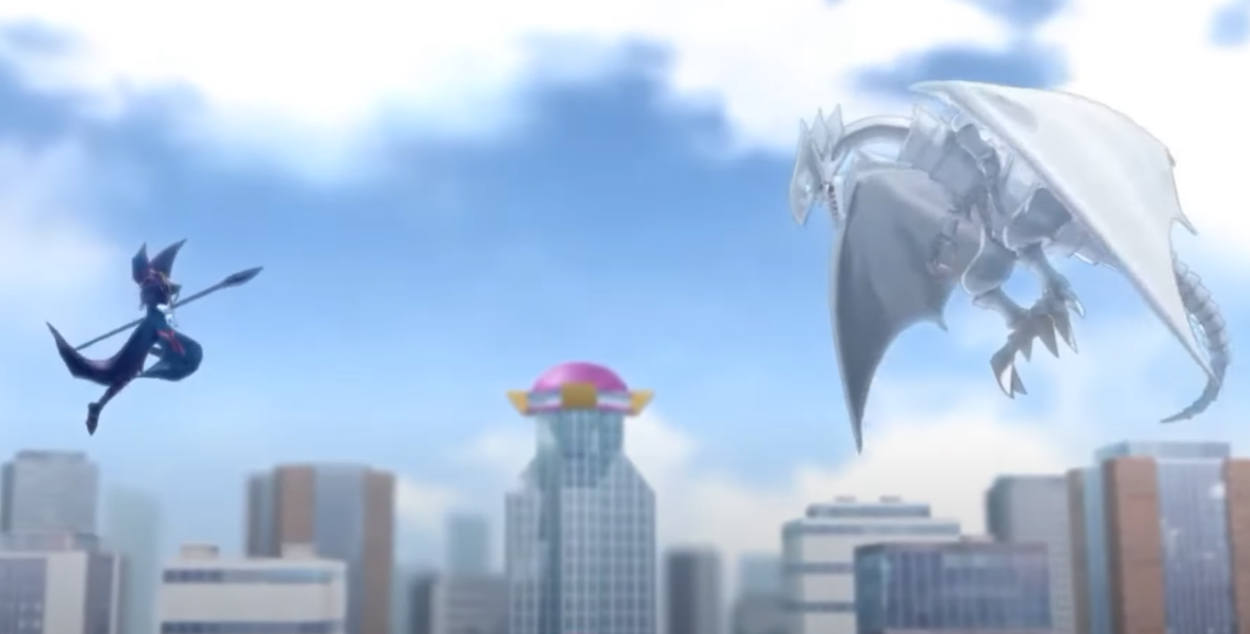 Yu-Gi-Oh! CROSS DUEL does not function like other Yu-Gi-Oh! games, merging multiple formats together into a free-for-all Duel that will have players reacting to each other’s moves in a limited number of turns.

The core gameplay has players strategically summoning monsters in three lanes and trying to cross the Duel Field to land a direct attack on the opponent at the end of that path.

Using well-timed summons, Spells, and Traps, the goal of CROSS DUEL is to eliminate your opponents or have the most Life Points at the end of eight turns. To do this, you will need to build a deck that can both put offensive pressure on weakened targets while also having the ability to withstand incoming attacks from multiple angles.

What is an Ace Monster in Yu-Gi-Oh! CROSS DUEL?

Ace Monsters are powerful cards that represent a number of characters from the Yu-Gi-Oh! anime. This includes everything from the staple Blue-Eyes White Dragon and Dark Magician to the newer Sevens Road Magician and Multistrike Dragon Dragias.

The monsters add another anime element to CROSS DUEL, pulling from the original Yu-Gi-Oh! series and making one creature act as the heart and soul of your Deck—down to a special ability that can help you swing a Duel in your favor.

After completing the tutorial you will get to choose from a wide selection of iconic Ace Monsters to kick-start your collection. But it is important to know just how they work before you dive in.

How do Ace Monsters work in Yu-Gi-Oh! CROSS DUEL?

Ace Monsters will always be included in a player’s starting hand, though they can’t always be used right away since most of them require multiple tributes to bring out.

These powerful monsters tend to have special Master Skills which can turn the tide of battle once they are successfully summoned. This ranges from Blue-Eyes White Dragon being able to destroy any single Monster on the field when summoned to

Just note, that you can set just about any Monster in the game as an Ace Monster too, it doesn’t have to be one of the cards you select at the start—though those will be the most common, especially early on. It all depends on the style you want to play, what benefits your Deck the most, or what monsters you want to make shine.

What is the worst Ace Monster to choose at the start in Yu-Gi-Oh! CROSS DUEL?

Again, any Monster can end up being your Ace Monster, but at the start, you will be given a selection of cards that are all tied to iconic characters from the Yu-Gi-Oh! anime. And any Monster can be useful in this role, there is no wrong choice.

Most of the cards have serviceable Skills that can easily make for good boss plays when you have the resources available. There are, however, some that just don’t lend themselves to easy-to-start gameplans and require more intimate knowledge of CROSS DUEL and its systems, or a more specific card pool, to get the best results.

Dark Magician is the best, and worst example of this in that initial selection. Because it is such an iconic monster, many players might select the Spellcaster without a second glance at its Master Skill, which is a mistake that could set them back depending on how they want to play the game.

At the core, Dark Magician’s Master Skill lends itself best to a Spell-centric deck since he can deal 300 damage to all other players when you use a Spell Card while he is on the field. That sounds great on paper, but when you consider that you have a limited number of cards you can bring into a Duel and will need to fill that Deck out with mostly monsters to attack, defend, or even tribute to bring Dark Magician out it can get dicey.

So for players looking to have an easier time in lower ranks or that just want to make sure they aren’t starting behind the curve, here are some strong choices you can make out of that Ace Monster selection to get you started.

What are the best Ace Monsters to choose at the start in Yu-Gi-Oh! CROSS DUEL?

It is almost poetic that Kaiba’s ace is one of the best early choices while Yugi’s is among the worst.

Blue-Eyes White Dragon not only has one of the highest stat totals in the game, with 3,000 ATK and 2,500 DEF, but it also has the most direct Master Skill you will find.

When summoned, Blue-Eyes allows you to destroy any single Monster on the Field, regardless of which lane it is in. This obviously won’t work on monsters who have Skills allowing them to avoid being targeted or that are saved by strategic Trap Cards, but it is an easy way to gain some control over the board in an offensive or defensive way.

As one of the more unique Master Skills, Neos can do that Yu-Gi-Oh! players commonly refer to as “floating” to an extent. This means that you gain some form of advantage even when he is destroyed, which in this case results in him returning to your hand once he is destroyed in battle.

If that Master Skill does go into effect, you can then use Speedy Summon to bring Neos back out for only a single tribute, though it will lose 1,000 ATK and DEF as a result, and Superspeed. The latter allows Neos to quickly cross the lane he is in, leading to more oppressive movement.

This gets really interesting once you start stacking Skills too because Neos becomes more efficient to use and can really put pressure on any of your opponents.

Yusei Fudo was known in the anime for using a lot of low-level monsters with unique effects to swarm the Field or provide advantage. Stardust Dragon plays perfectly into that, as its Master Skill gives Reincarnation to all of your Level three or lower monsters while it is on the Field.

This is perfect for swarming the Field with weaker monsters, and bringing out Stardust when you are really ready to bring the heat by ensuring you always have monsters to summon into lanes.

Not only that but when Stardust itself is destroyed, not just in battle, it returns to your hand with all of its Skills negated. This means you recycle it as a 2,500 ATK Monster that is ready for another round of action. Not too shabby if you play around cards that can pop it right away, like other Ace Monsters.

Blue-Eyes if it was a missile barrage rather than a single focused strike, Red Dragon Archfiend will destroy all DEF Position monsters on the Field at the end of each Battle Phase it is active for. This includes your own, but if you pick this card, you are likely going all out with offensive cards, or can at least plan around summoning it.

If you want an easy early pick, this is a good one simply because you won’t have to think too hard about where to place the 3,000 ATK beatstick and it will fit in basically any Deck.

Do you like Pendulum Decks? Then this is your pick.

You can Tribute Summon Odd-Eyes like any other Monster, but if you Pend Summon it all of your monsters gain 800 ATK and DEF, plus immunity to destruction effects like Trap Cards and Skills. Very powerful and can easily give you an advantage, but you have to play the right Deck for it since you have to commit to playing Pend and create the right Pend Scales.

Second verse, same as the first. If you like Link Summoning this is your pick since Firewall Dragon will only really unlock its potential when you are able to have multiple Link Monsters in play or rotation.

The more Link Monsters you have, the stronger Firewall can be. Here is just an overview of its Master Skill.

You will likely see a lot of Firewall in high-tier play once things shape out, but you will have to work on your card collection to really get the most out of a Deck using it as the Ace.

Roll the dice. Try your luck. Use Inventor and pull a random Skill to make your own. That is what Sevens Road Magician and its coinciding Deck play like.

The more you use Inventor, the stronger Road Magician can get since you are already stacking other monsters with new Skills throughout the game. This Ace Monster gains 400 ATK and DEF for each time you have had a monster use Inventor, which can quickly make it one of the strongest cards in the game.

In addition, if you summon Road Magician after a total of four Inventor Skills have been activated, it gains two random Immunity Skills, which can potentially make it untouchable. A risky play, but one that can easily pay off if you like to gamble a bit.

This is another slightly conditional card, but Dragias gives your monsters an Extra Attack buff while it is on the Field. This means that they gain an additional 500 ATK when attacking directly.

This buff can stack with existing Skills, which results in them getting double Extra Attack buffs along with Pierce, which means they can deal damage through an opponent’s DEF position monsters. This can scale rapidly, but might not be very beginner friendly if you haven’t learned the game’s systems yet.

Dark Magician, Ojama King, Number 39: Utopia, Number 17: Leviathan Dragon, Bloom Diva the Melodious Choir, and Trickstar Holly Angel aren’t bad choices. They are just much more situational and likely won’t be as useful in as many situations as some of the other options.

You can also pull all of these Ace Monsters from the Gacha system, so you don’t need to worry about being locked out of using them. And, don’t forget any monster in the game can be used as an Ace, or you can put these Ace Monsters into the Deck as regular cards. It all depends on how you want to play.