Power of the Elements will introduce several new archetypes to the Yu-Gi-Oh! OCG and TCG when it launches later this year, including a new set of Thunder monsters known as Splight that focus on swarming the field and the number two.

This Dark Attribute Thunder archetype lets players Special Summon multiple smaller Effect Monsters from their hand as long as they control a Level or Rank 2 Monster on the field.

In each case, Splight monster can only be summoned once per turn using the from hand effect, though you can Special Summon multiple Splight cards with different names through this method. When Special Summoned, Splight Blue will let players extend the combo by adding another Splight monster from their deck to the hand, while Splight Jet will let them add one Splight Spell or Trap card. 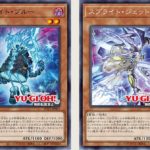 Splight Pixies and Splight Red keep the same Special Summoning condition, but instead of adding cards from the deck to the hand, they facilitate tributing other Level or Rank 2 Monsters on the field to negate and destroy cards.

After the regular cards we get into the boss monsters, specifically, Rank 2 Xyz Monster Gigantic Splight, which lets players treat Link-2 monsters as Level 2 when summoning it. Here is a full description of this boss monster’s effect, as translated by YGOrganization:

Splight Elf is the only other Extra Deck Splight we have seen so far, coming is a Link-2 and ensuring that your opponent can’t target monsters it points to with card effects. Additionally, you can use it to Special Summon a Level 2 monster in your Graveyard (GY) as a Quick Effect during either Main Phase, with the ability to choose a Rank/Link-2 monster instead if your opponent controls a monster already.

Not only do the new Splight cards stand on their own, but they also tie into Therions and Springans with some of the cards like the Quick-Play Spell Splight Smashers, which lets you banish one card of those three archetypes from your hand or GY to activate one of the following effects.

Two other Spell Cards were also revealed, with Splight Gamma Burst will give all Level, Rank, or Link-2 monsters on the field 1,400 ATK and DEF until the end of the turn. You can also banish it from the GY during your Main Phase to target one Level, Rank, or Link-2 monster you control to have it gain 1400 ATK until the end of your opponent’s turn.

The final card is Splight Starter, which is aptly named as it will limit you to summoning Level, Rank, or Link-2 monsters for the rest of the turn you activate, but lets you immediately summon a Splight monster from your deck at the cost of Life points equal to its ATK points.

Power of the Elements releases for the OCG on April 23 and will be coming to the TCG on Aug. 5, barring any delays.