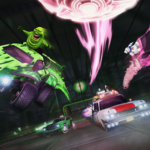 Halloween has come to Rocket League.

The game’s spooky Haunted Hallows event is now live with Ghostbusters-themed cosmetics, extra challenges, and two returning limited-time modes. Players have approximately two weeks to earn their rewards before the whole event gets sucked into a Proton Pack on Nov. 2.

This year’s collection is available through challenges, but a few returning cosmetics will make their way to the Item Shop—including the Ghostbusters’ Ecto-1 Battle-Car and the Stay Puft explosion.

To get the Haunted Hallows 2020 items, players must simply complete a battery of simple challenges. Rewards come from simple in-game actions. Using the quick chat, scoring, and getting centers, assists, and saves all give out unique rewards. Unlike Llama-Rama, challenges run independently of each other.

Ghostbusters fans can have a field day in the Item Shop. The Ecto-1 Battle-Car will be in stock between Oct. 21 and 22, while the Stay Puft goal explosion will be available for purchase between Oct. 23 and 24. The two items were a part of the Ghostbusters Pack, which was removed from online stores and is available exclusively through the in-game shop.

A few items from previous Haunted Hallows events will also be available in the Item Shop starting on Oct. 25. Players can get their hands on the Ectoplasm universal decal, a Titanium White version of the Demon Disc wheels, and two goal explosions: the Vampire Bat and a Crimson variant of the Reaper.

Players can also get extra rewards from repeatable challenges. Winning 10 online matches yields 10,000 XP while playing 20 online matches gives out a Golden Pumpkin (up to a maximum of five). Opening a pumpkin reveals an item from the Turbo, Nitro, and Vindicator series—a remnant of Rocket League‘s previous event format before the game added Drops and Blueprints.

Two limited-time modes are making a comeback in the Halloween event: Haunted Heatseeker and Spike Rush. The spookier version of Heatseeker takes place in the new Haunted Urban Arena map, while Spike Rush matches will be held in nighttime venues. Heatseeker is live until Oct. 26, while Spike Rush will dominate the rotation for the remainder of the event.

Haunted Hallows 2020 isn’t the first event to feature cosmetics inspired by pop culture phenomena. Last year’s Halloween event brought a series of Stranger Things cosmetics to celebrate the show’s third season. Players could get their hands on the Starcourt wheels, the Hawaiian Hopper decal (in honor of Hopper’s so-bad-it’s-good Hawaiian shirt), and a Stranger Things boost that played a synthesizer sound when accelerating. Like this year’s event, the Stranger Things collaboration also brought a twist to an existing map: a terrifying version of Farmstead with the show’s Mind Flayer in the background.