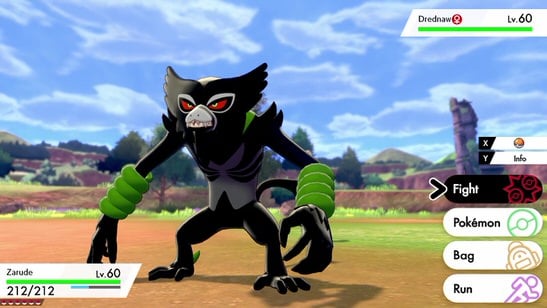 Pokémon Sword and Shield players outside of Japan can finally get the mythical Pokémon, Zarude. The Pokémon Company is making two types of distributions via email and a serial code.

Trainers from the U.S., Canada, and Latin America can sign up for the Pokémon Club newsletter and opt in for email marketing by Nov. 20 to receive a password on Dec. 11 and add Zarude to the game.

If you’re from the U.K. and other European countries, you can get a serial code from several retail stores until Dec. 13 to receive a Zarude. Here’s the list of the stores in each country:

Zarude is featured in the new Pokémon movie Koko and the new TCG expansion Vivid Voltage. It can’t be found in Pokémon Sword and Shield through normal gameplay.

The distributed Zarude will be at level 60, will have the Leaf Guard ability, and will know the moves Close Combat, Power Whip, Swagger, and Snarl. It’s a Grass and Dark-type Rogue Monkey Pokémon and has an exclusive move in Pokémon Sword and Shield called Jungle Healing.

Japanese fans who pre-ordered tickets to watch Koko in theaters already received this Pokémon in June. But the rest of the world will have the chance to get it five months later. A new form of Zarude will reportedly be distributed in Japan for the movie debut, though.