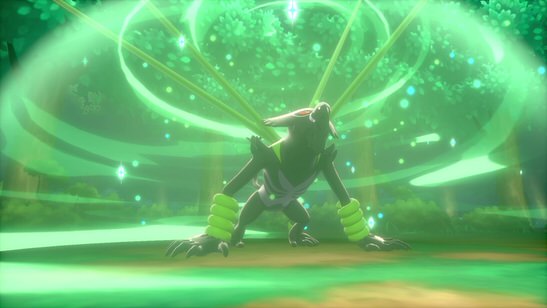 European trainers will have a second chance to get the mythical Pokémon Zarude by signing up for the Pokémon Trainer Club newsletter until Dec. 18.

You’ll receive a serial code in January to claim Zarude. This option was only made available for trainers from the U.S., Canada, and Latin America last month following the launch of the TCG expansion Vivid Voltage. U.K.-based players had until yesterday to go to GAME Stores or access the GAME Online store to get the serial code.

The distributed Zarude will probably be the same as the previous campaign. That means trainers can expect it to be at level 60, have the Leaf Guard ability, and know the moves Close Combat, Power Whip, Swagger, and Snarl.

Zarude is a Grass and Dark-type Rogue Monkey Pokémon and has an exclusive move in Pokémon Sword and Shield called Jungle Healing. It will also be featured in the new Pokémon movie, Koko.

You can’t encounter Zarude in normal gameplay in Pokémon Sword and Shield, however, so you’ll have to redeem the serial code to get one.