Screengrab via The Pokémon Company International

It’s a dramatic set. “The velvet night glows, burns and blazes astoundingly bright as the Legendary Pokémon Eternatus arrives as a Pokémon V alongside Centiskorch V, Mew V, Galarian Slowbro V, and many others,” the description reads.

This expansion is made up of the Infinity Zone and Explosive Walker sets from Japan. Players will also find Pokémon VMAX in their Gigantamax forms, like Charizard VMAX, Grimmsnarl VMAX, and Butterfree VMAX, for example. 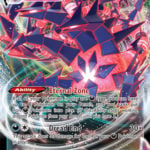 There are new Galarian versions of Pokémon in this expansion as well as Galarian Darmanitan and Galarian Sirfetch’d theme decks. Players will also encounter new trainer cards including gym leader Piers and Chairman Rose. 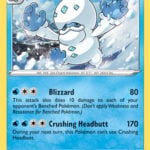 The Sword and Shield TCG sets that were previously released include the basic set and the Rebel Clash expansion. The next expansion in line, the Champion’s Path, will start to release on Sept. 25. It’ll bring an additional experience to the card game with gym badges to collect.

Players can buy the physical version of the cards or play the game online. The Pokémon TCG online game is available for Windows, Mac, iOS devices, and Android devices.