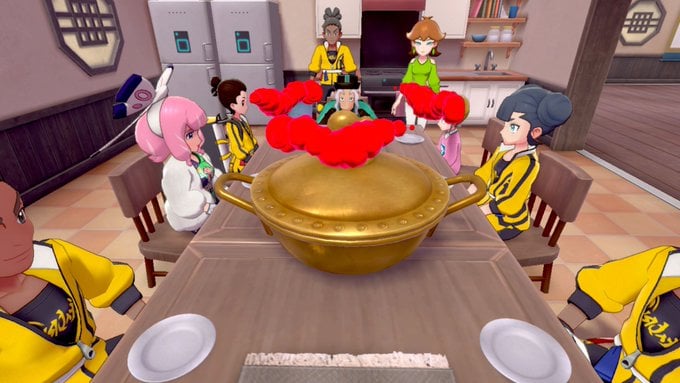 A bunch of new details about Pokémon Sword and Shield’s DLC, The Isle of Armor, have been flooding the internet today.

While small glimpses of new features were teased for both of the DLC sets, Pokémon website Serebii revealed some major information about the DLC, including a feature that has the potential to turn a Dynamax Pokemon into a Gigantamax Pokémon.

The feature, known as “Dynamax Soup,” was showcased briefly in the three-minute trailer. When a Pokémon that has a Gigantamax form drinks from the soup, there’s a chance that it’ll gain the feature. It seems like only Pokemon that can Dynamax can drink from the soup, though, so Pokémon like Zacian and Zamazenta will be excluded.

Not much else is known about the feature, how it’ll work, or when it’ll be unlocked. But if it’s added to the games, it’ll reduce the amount of Gigatamax raid grinding players would otherwise need to do to catch ’em all. It’d offer a potentially easier alternative to get any Gigantamax Pokémon a player desires.

This would also allow competitive players to breed a perfect Gigantamax Pokémon with more ease then they could’ve done before, so it’s definitely a win-win situation.

The Isle of Armor is set to be released on June 17.