2022 is set to bring in a ton of new content to the Pokémon TCG, and according to a report, this will include a new Battle Academy. PokeBeach reported an updated Pokémon TCG: Battle Academy box is in the works and will be launching at an undisclosed date.

There aren’t too many changes in this upcoming version of the Battle Academy. The most obvious is the new featured Pokémon for the three included decks, which are Pikachu, Eevee, and Cinderace in their V forms. 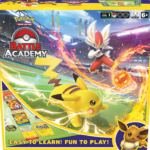 Included with these promos are three 60-card decks, a gameboard, a guide, rulebook, an oversized coin, damage counters, and a Pokémon TCG Live code card.

Battle Academy 2 is almost identical to the Pokémon OCG: New Family Box Set that launched in Japan in July. The two products boast an identical purpose, to teach new players how to get into Pokémon TCG. This is accomplished by including mostly simple or luck-based cards.

While we don’t have a date for its release, according to the report, the $19.99 price will remain the same as the initial Battle Academy.