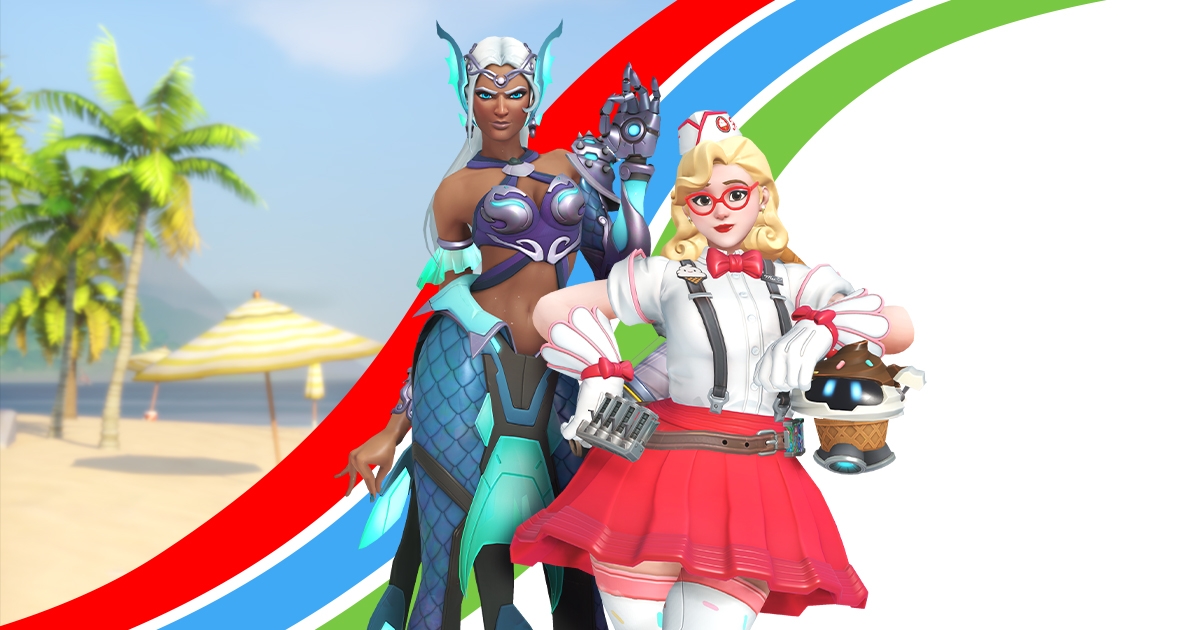 Since the release of Overwatch in 2016, there have been some great and not-so-great skins added to the team-based shooter.

In Overwatch, there are four skin tiers: Common, Rare, Epic, and Legendary. All Common skins are also known as default skins and can’t be unlocked. But what about everything else? Which skins released this year are worth the splurge?

Vampire Hunter Brigitte was released in October for Overwatch‘s annual Halloween Terror event. This is one of the best Brigitte skins to date because of her new platinum blonde hair and long, stylish coat. It feels medieval and edgy, reminiscent of Cassidy’s Helsing skin from 2017, which has the same aesthetic and color palette. Vampire Hunter Brigitte is a Legendary skin, so it’ll set players back 3,000 coins.

Overwatch got another W with the release of this Legendary Satyr Lucio skin this year. Released for the 2021 Halloween event, this skin completely transforms bright and upbeat Lúcio into a demonic-looking creature from a Diablo game. He has glowing red eyes, devilish horns, and some occult-looking skates. This skin is a must-grab for every Lúcio main wanting to change up their look.

Junkfood Junkrat is like if one of the kids from Willy Wonka and the Chocolate Factory got trapped inside a candy machine and came out 30 years later, wired up on sugar and seeking revenge. While the Overwatch team has gone wild and wacky with Legendary Junkrat skins in the past, this one knocked it out of the park for this year’s Anniversary event.

In this skin, Junkrat has cotton candy hair, a cupcake crown on his head, and a lollipop-inspired peg leg. And in case anyone was wondering, his rip-tire is made of candy too. Whether fans find Junkfood Junkrat adorable or an eyesore, Junkrat fans can unlock this skin for 3,000 coins.

Mermaid Symmetra is a Legendary skin that was released as a part of the 2021 Summer Games event. The skin costs 3,000 coins and gives Symmetra an ethereal look. She has long white hair, scuba suit-like pants that resemble a mermaid’s tail, and a headpiece with fin-like attachments. For those who missed out on the Tyrande Symmetra skin, which also has an icy color scheme, Mermaid Symmetra is a great alternative so players can look stylish while using that teleport on Hanamura.

Bull Demon Orisa is one of the omnic’s most dramatic transformations yet. Released for the Lunar New Year event and the Chinese New Year of the Ox, this Legendary skin depicts Orisa as a mythical ox with white horns and fur, a blue mask-like face, and elaborate armor. Definitely one of Orisa’s most intimidating skins, Bull Demon Orisa is ideal for those who like the character’s tougher side.

Inspired by Norse Mythology, Draugr Reinhardt is a terrifying sight to behold. This Legendary skin was released as a part of Overwatch‘s Halloween event and pays direct homage to the draugr, an undead warrior spirit in Viking mythology. The massive main tank wears this skin well, with an axe instead of a hammer, a desiccated face, glowing eyes, and horned armor.

In the Renaissance period, musketeers were known for their lavish attire. Mousquetaire Widowmaker is no exception, with a fleur-de-lis shirt, striped pants, tall boots, and a flamboyant feathered hat. The outfit matches Widowmaker’s French origins and interest in battle and weaponry. This skin was released as a part of the 2021 Archives event.

Sprinkles Mei depicts Mei as a retro diner waitress of sorts. Released as a part of the Summer Games event, the Sprinkles Mei Legendary skin has plenty of charming details as well as an appealing aesthetic overall. Mei is nearly unrecognizable with blonde curls, red glasses, and her bot dressed up like a dessert. Sprinkles Mei is a must-have for any Mei player looking to bring some old-school Americana flair to their games. Want some ice… cream?

The Overwatch team really did a stellar job with the Summer Games skins this year, and the Legendary Poolside Ashe is no exception. With her ombre pink hair, flamingo B.O.B., and hilarious water gun, this Ashe skin brings an air of fun to the otherwise serious DPS character. Ashe is known for her style, however, considering her other Legendary skins like the Socialite skin. Poolside Ashe honors the character, giving her a chic new look complete with earrings, orange sunglasses, and ironic water wings. The latter of which begs the question: can Ashe swim?

Rounding out the list of the best Overwatch skins of 2021 is Kendoka Genji, inspired by the Japanese martial art form of Kendo. The fighting style involves the use of bamboo swords and grilled face coverings. This skin design is technically accurate, with protective gear, shoulder pads, and a sword that matches that of Kendo practitioners. Genji is known for his blade, mask, and green and gray color scheme, so this skin suits him perfectly while also staying true to Kendo.