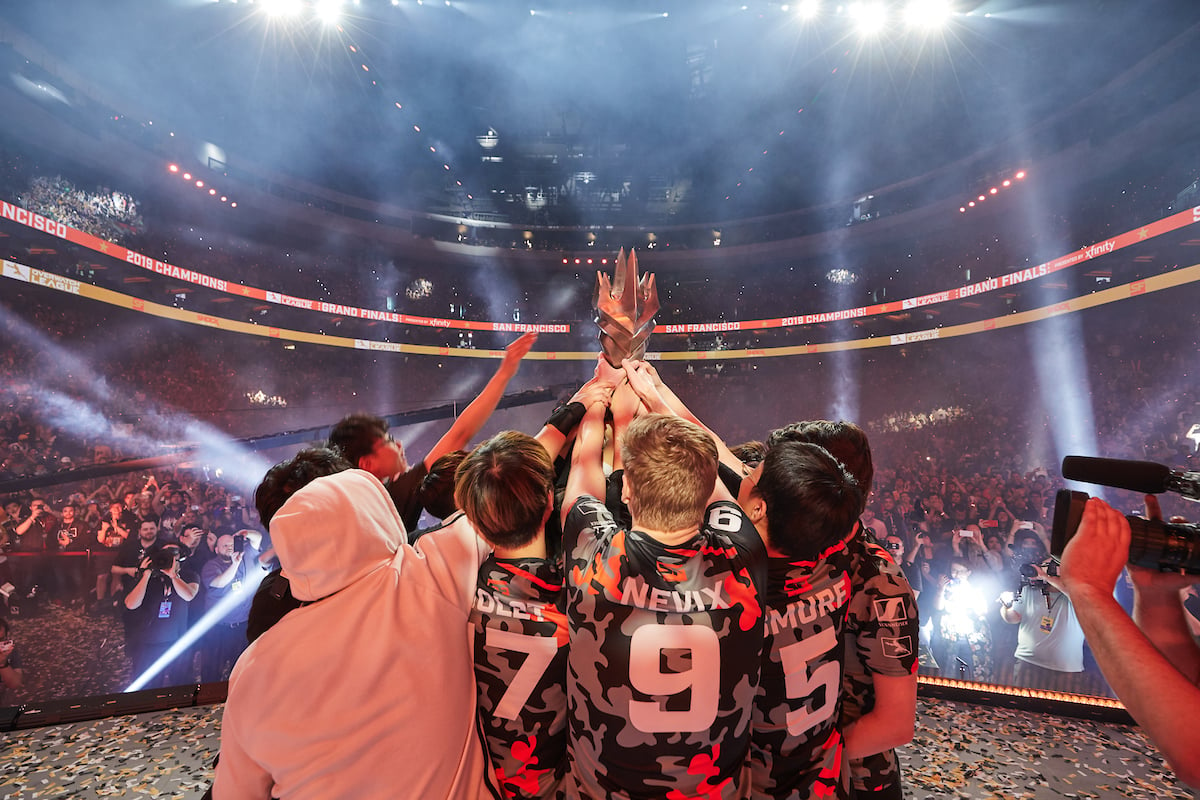 Gathered at a press conference table wearing sleek new championship jackets last weekend, the San Francisco Shock reveled in their recent 2019 Overwatch League grand finals win. Following a dominant 4-0 victory against the Vancouver Titans, the team was full of energy and excitement. They also gave some insight into the development of a championship team and how much the emotional win meant to the entire Shock family.

While the San Francisco Shock and Vancouver Titans built an electric rivalry over the second season of the Overwatch League, the Shock came out ahead in the final match. Multiple players on the team attributed the win to the deep talent and flexibility of San Francisco’s roster. While Vancouver kept the same DPS duo in for the entirety of the match, San Francisco swapped players in and out on different maps.

“We tried to maximize each roster for each meta,” head coach Park “Crusty” Da-hee said.

“I think we could win the final because we tried to maximize the strategy.” said Andy Miller, owner of NRG Esports and the San Francisco Shock. “I’m not, no pun intended, shocked that we won. I think this team was the best team before we got the season started. [Other teams] were just waiting for our team to fall apart and we never did.”

The start of the postseason was rough for the San Francisco Shock. The team lost to the Atlanta Reign in the quarterfinals, dropping to the losers bracket. The Shock managed to 4-0 every team that stood in their way throughout the losers bracket and made it to the grand finals, but not without learning something from their mistakes.

“That match was really emotional for us,” Crusty said. “After that match, all of our players cried because we could have won that match.”

Main support Grant “Moth” Espe said that the loss positively motivated his team. “I definitely think it made us work harder immediately after that match,” Moth said. “We worked a lot more to better our understanding of the meta and refine our teamwork as much as we could.”

Both the players and coaching staff echoed how hard they worked in the weeks leading up to finals, putting in hours of practice and analysis. This championship obviously meant a lot to them.

“Prior to me joining this team, I got into a lot of fights with my parents because they weren’t too supportive of my gaming career,” flex support Park “Viol2t” Min-ki said. “Not only them, but my peers also. They told me, ‘why would you play games for a living?’” This win allowed Viol2t to prove that he’s “the best.”

“It’s just incredible… that all of our hard work has paid off. That’s really what I was thinking of in the moment,” Moth said, about the moment the team hoisted the Overwatch League championship trophy in the air. “For me, I just can’t believe that two years ago I didn’t expect to go pro. I was playing Overwatch on the side in college, trying to be a software developer, and now we’re here.”

After a lackluster inaugural season of the Overwatch League, not many people expected the astronomical rise of the San Francisco Shock. But Miller did, and the NRG Esports CEO openly admitted that the team focused on long-term success instead of instant gratification. Miller knew as soon as the Shock signed 2019 MVP Jay “Sinatraa” Won and main tank Matthew “Super” DeLisi before either of them were 18 and eligible to play in the Overwatch League.

“Once we knew that we had Jay… we said ‘hey, he’s not gonna start until halfway through the year.’ We need to build a team for 2019, not for 2018,” Miller said. “Jay was a known quantity, but young. Super was not a known quantity… the day we met him we could see this ‘chad personality’ emerging and we knew we would have the big toe of this team.”

The San Francisco Shock ended the year with a championship title, $1.1 million in prize money, a stage championship win, and a host of awards for their players. But the question on everyone’s mind was about the likelihood of continued success in 2020 when the team moves to San Francisco for the third season of the Overwatch League.

“When season three comes around, it’s grind time again,” Super said with his usual level of confidence. “We’ll just do what we did this year.”

Miller was a bit more practical in his forecast.

“We do have pretty much the whole team coming back next year,” Miller said. “But it’ll be very different because we’ll be on the road the whole time, aside from some home matches in San Francisco. It’ll be very complicated and hard from a health standpoint and a travel standpoint. The flexibility of having a big roster may disappear. It’s gonna be a whole new game next year.”

Miller also explained just how much the win meant to his team considering the stacked competition they faced against both on-stage talent and off-stage sponsorship battles.

“We have some fancy celebrities, but we’re not the Patriots, or Cox, or Comcast, or the Mets,” Miller said. “We’re just a bunch of guys who love playing games and we were able to put together… the greatest Overwatch team anybody’s ever seen.”

“We built a dynasty here,” Miller said. “That’s the goal… we can be a championship team for years to come.”