The rivalry we always deserved, sharks in the water, and a whole lot of playoff math. 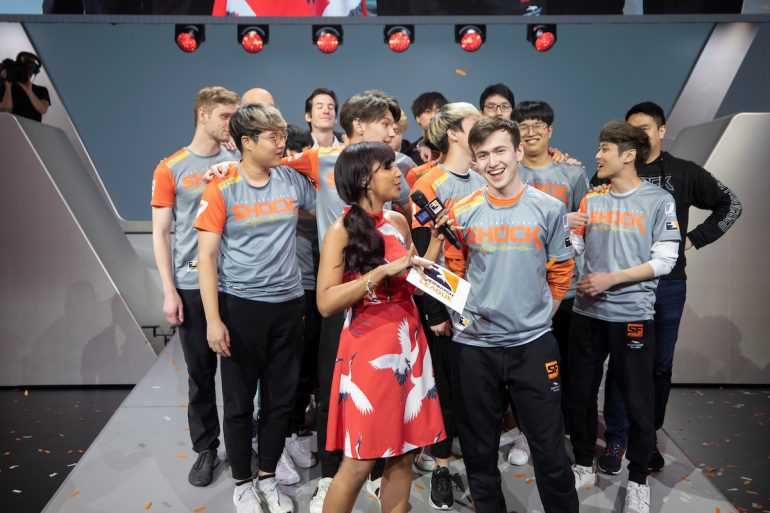 Overwatch League’s second season is already halfway over after the completion of stage two in May. After a nearly month-long break, the teams are ready to come back and fight for playoff contention.

The storylines this stage revolve around the almighty standings leaderboard. While success in any singular stage is important, every team is really playing to be under the bright lights of the Grand Finals in September.

The Overwatch League has long tried to manufacture rivalries between teams, like Houston and Dallas battling over Texas or the New York Excelsior and Philadelphia Fusion gunning for East Coast superiority.

The respectful yet ferocious energy between the San Francisco Shock and the Vancouver Titans is the exciting, genuine rivalry fans have always deserved. Vancouver claims the stage one championship and an undefeated season; the Shock have the league’s first “golden stage” (with no map losses) and a second stage championship.

While other teams are trying to break into this champion’s circle, it’s obvious that these two are almost destined for the Grand Finals. Before that enters into the conversation, both teams have to face stage three. If either of them wins another stage championship, they’ll match the New York Excelsior’s record of winning two stage championships in a single season. After Shock claimed the first “golden stage,” Vancouver may be looking to one-up them this time around.

While the Shock and Titans battle for dominance, four teams are trying to carve out a place for themselves at the top. The New York Excelsior is second in league standings, with a 12-2 record over the Shock’s 11-3. They went undefeated in regular season play before losing to the Atlanta Reign—twice. As talented as the Reign are, the Excelsior have been motivated to not let that happen this stage.

The London Spitfire, Los Angeles Gladiators, and Dallas Fuel all have the same season record (9-5) and are circling like sharks for a delicious top-four season finish. It’s mathematically very likely that all three will make it into season playoffs, but each team wants to prove that they, too, can survive at the top. When these teams play each other, it’s going to get really ugly, and fans should not miss those matches.

“So you’re saying there’s a chance?”

For season playoffs, the top six teams in league standings will automatically qualify. The seventh through 12th teams will battle it out in a play-in bracket. For the entire “middle class” of the league, the goal is to steal one of those top six spots from the leaders mentioned above.

The Philadelphia Fusion and Hangzhou Spark both have an 8-6 record and enough talent to put their teams into overdrive for stage three. Five teams — Seoul Dynasty, Atlanta Reign, Toronto Defiant, Boston Uprising, and Shanghai Dragons — have an even 7-7 record. For those teams, the goal this stage is to get a higher win record than their fellow “50 percent winrate” peers. All of these teams, mathematically, have a chance to outdo the top six teams and end up in season playoffs.

While the Chengdu Hunters, Guangzhou Charge, and Paris Eternal all have decently competitive win records, they’ll have to play smart to get into the play-in bracket for season playoffs.

It’s a more dire outlook for the remainder of the teams in the league. The Los Angeles Valiant and Houston Outlaws both logged a 0-7 stage this season and sit at a 3-11 record. Below them, the Washington Justice (2-12) and Florida Mayhem (1-13) are working hard to restructure their teams, but it may be too late.

Mathematically, none of these teams have been eliminated from playoffs. Realistically, it will take a monumental stage and some miracles for any of them to make it. Never say never, though. Every match, map, and fight counts for these teams. They’ll be battling to keep their heads above water and it’ll be fascinating to watch.

The next set of “home games” for the Overwatch League take place July 6 and July 7 in Atlanta, Georgia. Dallas, Texas hosted the first set of home games in April, and aside from an unfortunate county-wide power outage, they were a success for the league. The Atlanta games feature teams mostly from the Atlantic Division, including the New York Excelsior and Philadelphia Fusion.

While the matches are the focus of any homestand, the team is also celebrated and featured. The Atlanta Reign roster is known to be charismatic and into shenanigans. How much trash will Dusttin “Dogman” Bowerman talk? Will Andrej “BABYBAY” Francisty show off his rap skills? We’ll find out in July, whether we actually want to or not.

Stage three of the Overwatch League begins June 6 with the San Francisco Shock taking on the Shanghai Dragons at 6pm CT.