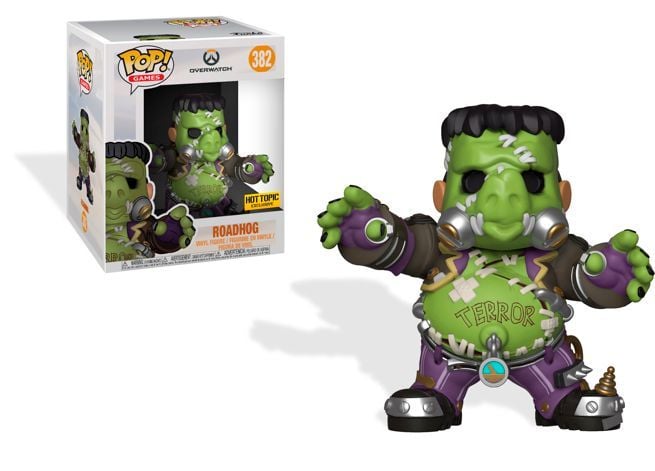 Your favorite Overwatch heroes are prepping for the spookiest holiday of the year. Overwatch’s Halloween Terror 2018 event is still days away, but you can get your hands on two scary Overwatch Funko Pop! figures right now.

Funko and Blizzard revealed the toys last week, but they’ve become available on Oct. 1 on BoxLunch.com and Hot Topic. The two figures are for Junkrat and Roadhog in their Halloween Terror skins—Dr. Junkenstein and Junkenstein’s Monster, respectively. The Roadhog Funko Pop! is only available at Hot Topic for $27, while the Junkrat Funko Pop! is $13 at BoxLunch.com.

“Just in time for Halloween, BoxLunch and Hot Topic will launch an exlcusive Pop! set from Junkenstein’s Revenge game play, the seasonal Halloween Twrror event that occurs in Overwatch in October,” Funko Pop! wrote on its blog.

The Roadhog figure is six inches, and Junkrat is almost four inches, which accounts for the price difference.

Blizzard announced earlier this week that Overwatch’s Halloween Terror will begin on Oct. 9. The seasonal event will run until Oct. 31, according to Blizzard. Like last year, Blizzard is expected to run the Junkenstein’s Revenge game mode, which pits a team of four players against hordes of omnic zombies. In a teaser posted to announce the yearly event, the Overwatch team hinted at something to do with the Château Guillard Overwatch map, but it’s not yet clear what that is.

Halloween-themed Overwatch skins will be revealed in the lead-up to the event, too. A swamp monster skin for Doomfist was revealed yesterday.