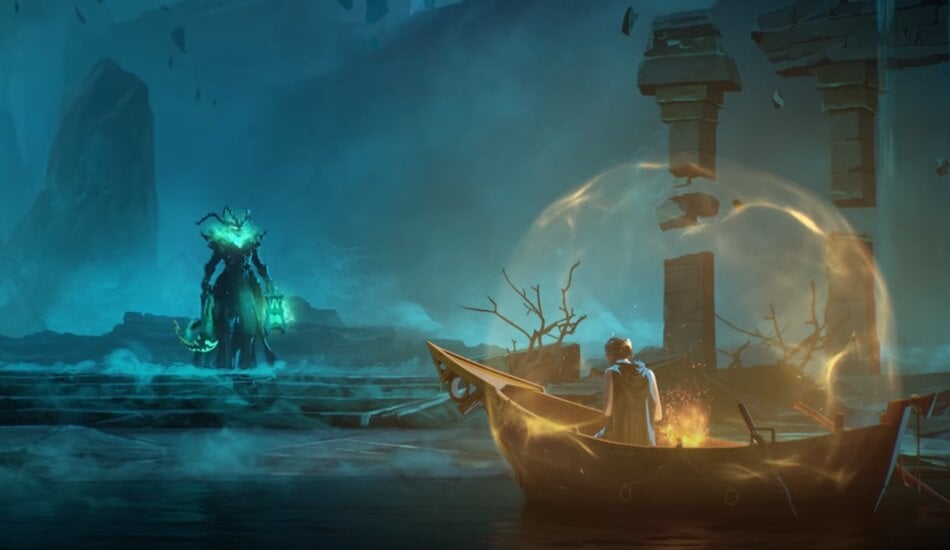 The Tales of Runettera cinematic, “None Escape,” continues to hype LoR spoilers leading up to the digital card game’s official release on April 30.

Twisted and full of despair are the Shadow Isles. And the Black Mist continues to spread beyond its boundaries while LoL and LoR champions like Thresh feed off the mortals who dare venture within.

The short begins with a mother and her son from the Serpent Isles entering the Ruins of Helia within the Shadow Isles to relight the wards that protect their village from the horrors and loose spirits. But they aren’t alone.

Thresh lures the boy out of his protection barrier using the image of his deceased father. Borrowing a voice line from LoR, he joyfully hisses “Round and round we go,” as he pursues the young man running for his life. Sadly, the boy fails to make it back to his mother in the boat with a protection shield. The short ends with Thresh gloating over his most recent soul acquisition.

Not all is lost for LoR players, however. “None Escapes,” may have subtly confirmed that Bilgewater may be the new region. The Serpent Isles are a group of small islands just outside of Bilgewater, and it has been rumored that one of the new cards is called Island Navigator.

The next set of LoR spoilers will drop tomorrow, along with patch notes for the 0.9.4 update.