Almost all of the tank items in League of Legends are being reworked, just in time for the mid-season patch, according to yesterday’s update to the PBE.

The Public Beta Environment (PBE) is League’s testing grounds for players to try out new features before they go live, so it makes sense that such a momentous change would make its debut there first. This update will certainly change the entire meta of the game, because some of the game’s most popular items are getting flipped and juggled around.

The goal of these huge changes, according to a developer post on the official League forums, is to make building tanky items more of a situational puzzle. Taking away some health from many items, like the Sunfire Cape, will make it more punishing to choose to build armor items if the enemy team has strong magic damage, and vice versa for magic resist (MR) items.

New items are being added to the game as well, like an item that can double an entire health pool to terrifying levels between 8,000 and 9,000 with the click of a button, and another that reduces incoming magic damage.

Some of these changes sound a little crazy, but that’s why they’re on the PBE. Usually, if Riot decides a change is a bit too extreme, they can revert it or simplify it before release day. Let’s take a look at the changes. 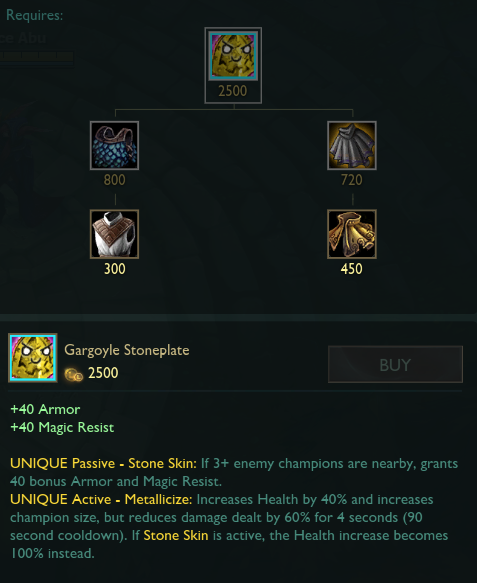 The Gargoyle Stoneplate is the most frightening addition to the tank arsenal. The item has pretty meager base stats, at first glance. When you make your way into the later stages of the game, however, and you’re near multiple enemies at once, the 40 armor and MR double to 80 each. Not only that, but the item has an active that increases your health and size by a significant chunk, but reduces your damage by 60 percent. If you’re near three or more enemies, however, your total health pool doubles.

As a tank, especially in the late game, this will be your “Get out of jail free” card. On command, your health bar will double to amounts as high as 9,000, and you’ve essentially turned into a giant, walking mountain. Using this active will be great for fleeing fights that go horribly awry, or turning yourself into one big distraction so your team can make a clean getaway. Using it to engage won’t be as useful though, due to the sizable reduction to your own damage. 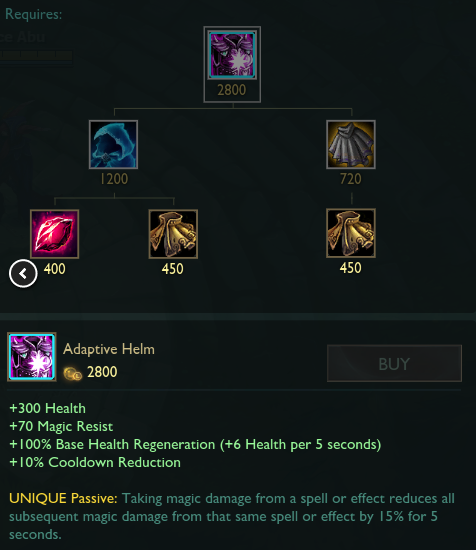 While not as scary as the Gargoyle Stoneplate, the Adaptive Helm is certainly powerful as well. It has stats similar to other health-plus-MR items in the game, but its passive is where it really shines. The Adaptive Helm has a persistent effect that causes all incoming magic damage to reduce all subsequent damage from the same source for a few seconds. It doesn’t block all incoming damage, that would be ridiculous, it only blocks spells and attacks that damage you after the first hit, like burns, poisons, and Katarina ultimates.

The passive ability wouldn’t be that strong, given that it only protects against repeat damage, except that it doesn’t have a cooldown. If you’re a tank and you find yourself against a strong magic-based enemy team, this item will probably become your staple. 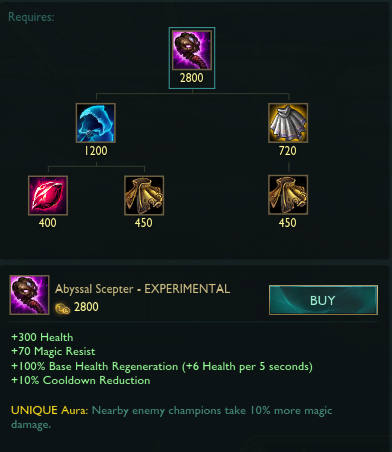 The Abyssal Scepter will be keeping its unique aura (causing nearby enemies to take more damage from magic), but its base stats will be swapped with the Banshee’s Veil. This will turn the Abyssal Scepter into more of a tank-support type of item. It boosts the damage that your team can cause but has little effect on your own damage because of its defensive stats. 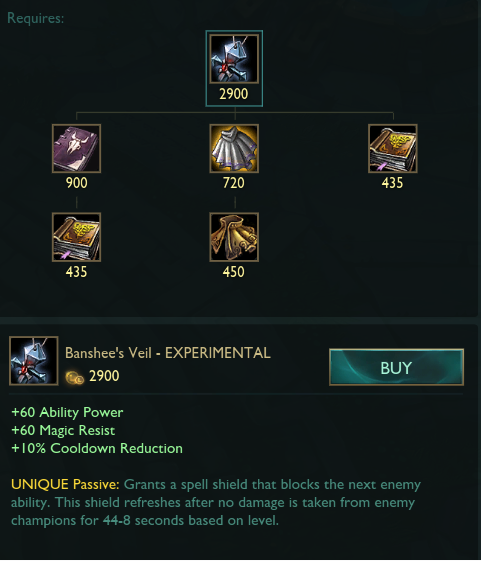 The Banshee’s Vail is assuming the regular stats of the Abyssal Scepter, but it’s keeping the same unique passive. The spell shield granted by this item will have a cooldown as low as eight seconds, depending on the wielder’s level. With the offensive stats of the Veil, this item seems like the magic counterpart to the Edge of Night, which is an AD item that offers both MR and a spell shield as well. 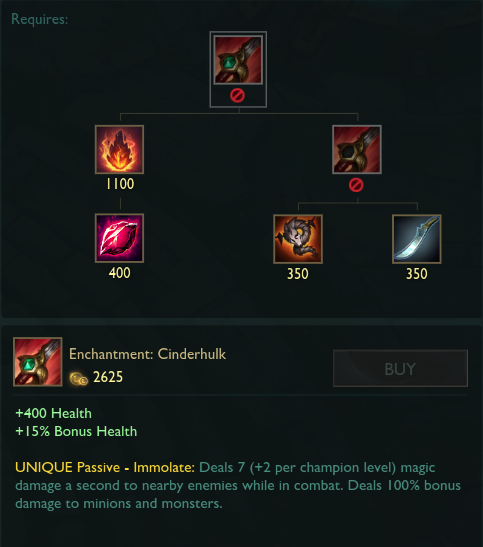 The Cinderhulk’s change isn’t as dramatic. It will not deal 100 percent bonus damage to all minions and monsters, making it ideal for jungling tanks instead of having to pick up a Titanic Hydra to clear camps effectively. With the increased damage affecting minions as well, we’re curious to see if the red-buff-cinderhulk meta of Season Four will return to the top lane on champions like Mundo and Shyvana. 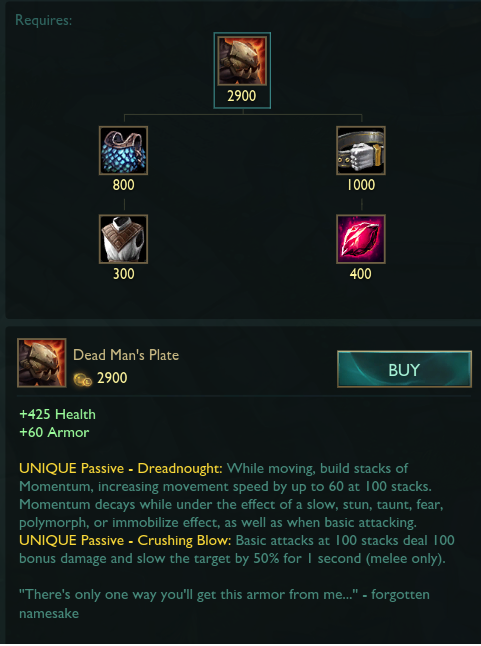 The Dead Man’s Plate is one of the most purchased tank items in the game. Much like most of the other tank items, it’s having its health reduced and armor increased. More interesting, however, is the change to the passive. The enhanced basic attack granted by the passive, Crushing Blow, will now only work if the stacks from Dreadnought are maxed at 100. The rate at which Dreadnought charges up has also been increased.

Doran’s Shield has been neglected lately, with tanks in the top lane opting to buy a Ruby Crystal or a Corrupting Potion at the start of the game instead. Doran’s Shield used to be the go-to starting item for tanks, and this buff may help it out. Instead of blocking a small amount of physical damage, it will make the wielder deal a bit more damage to minions, helping out with their farming. It will also give the user an impressive increase in health regeneration when damaged by an enemy champion. After these buffs, Doran’s Shield will likely make its return to the top lane. 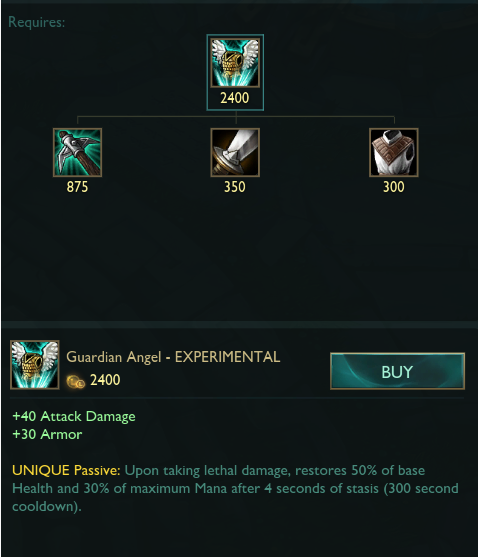 Riot’s goal for the Guardian Angel (GA) seems to turn it into an ADC or AD assassin item. It will now grant the wielder a chunk of AD, and its MR stat has been removed completely. This item will not likely be very viable after this update. 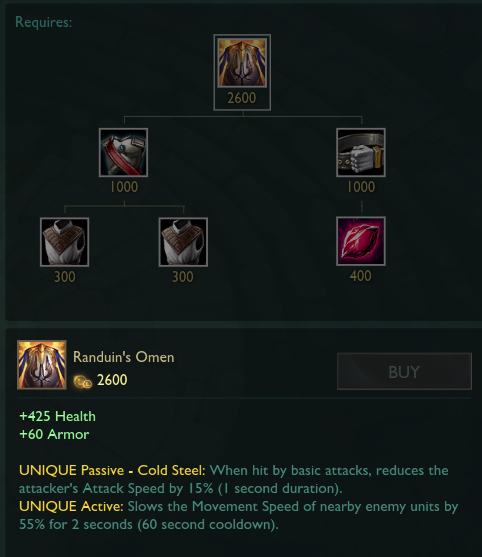 The changes to Randuin’s Omen is a more of a nerf than a rework. The critical strike damage reduction has been completely removed, and the slow from the active has been increased by 20 percent. With items like Dead Man’s Plate being the go-to tank item for building armor and chasing a victim, we don’t see Randuin’s having a place in the meta without its crit damage reduction. 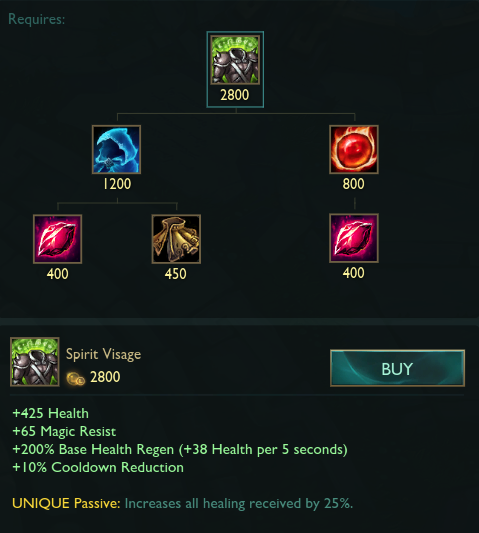 The Spirit Visage isn’t seeing a significant change compared to the other tank items on this list. Its health is being reduced, and the MR is being increased. 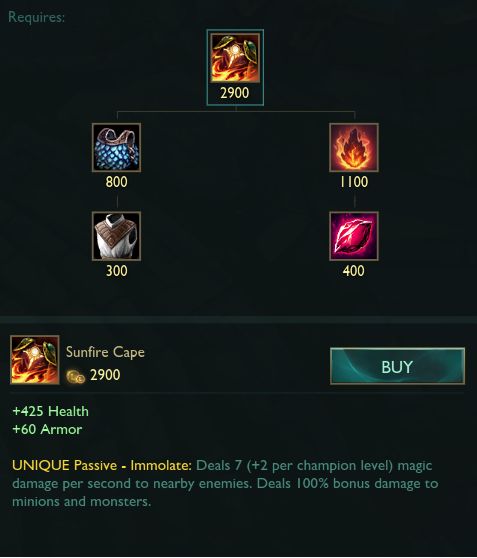 Sunfire Cape is going through similar changes as the Cinderhulk. The damage from the passive aura, Immolate, has been reduced slightly, but it will now also deal double damage to all minions and monsters. The Sunfire Cape will be built on top laners that want to split push or farm a little more efficiently. 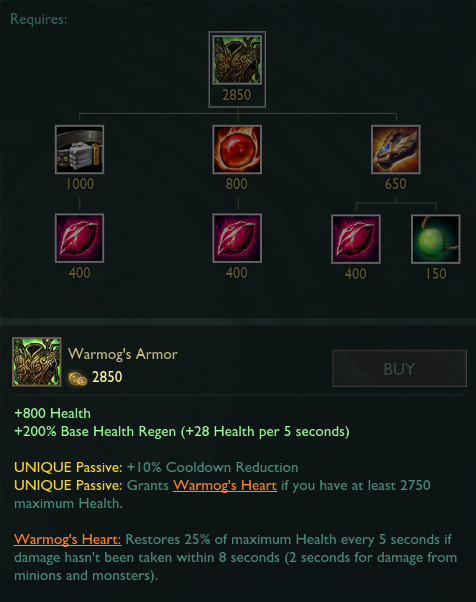 Warmog’s is the last big item to see a change, and it’s a great buff for the item. The health requirement to kick off its passive, Warmog’s Heart, was lowered from 3,000 health to 2,750 to compensate for the lower health count on nearly every popular tank item after this patch. The passive itself is also being buffed. Instead of regenerating three percent of your max health every second, you’ll now regenerate five percent every second, totalling at 25 percent of your total health every five seconds.

As exciting and game-changing as these item updates are, try not to get your hopes up. All of the changes are on the PBE, which means they’re all still subject to change by the time they release with Patch 7.9, which is still two patches away—so we’re looking at about six weeks of testing before these changes see the light of day. Still, though, the prospect of a Zac with 10,000 health with the Gargoyle Stoneplate is going to haunt our dreams.