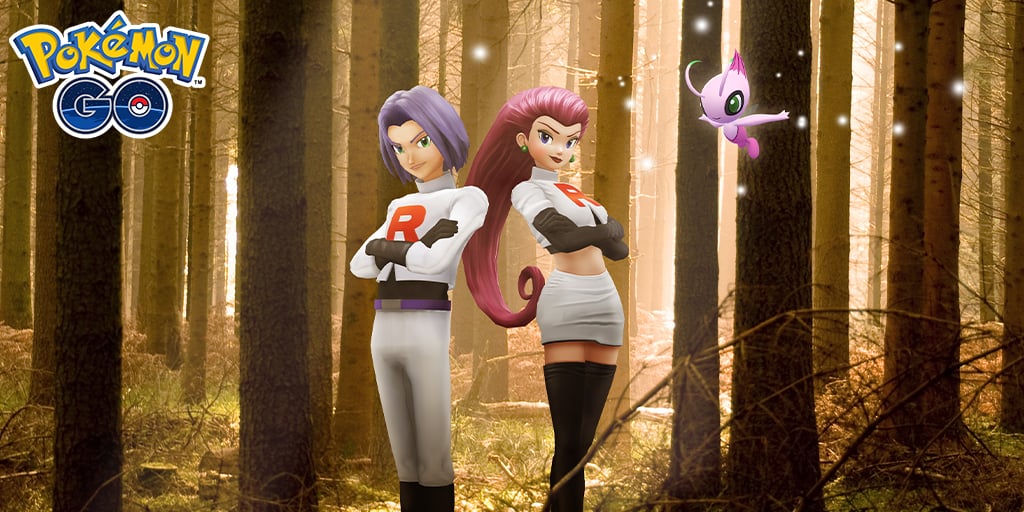 Celebi, the Time Travel Pokémon, is a Grass/Psychic-type Mythical Pokémon introduced in Pokémon Gold and Silver. Since its release, it’s been a rather elusive creature for trainers to get their hands on.

In the mainline Pokémon games, Celebi can only be obtained through special distributions and codes, whereas in Pokémon GO only one has been available per trainer through the “A Ripple in Time” research.

But another Celebi will be available for Pokémon GO players to obtain with special research releasing on Dec. 14 at 8am local time alongside an event tying in with the upcoming movie Pokémon: Secrets of the Jungle—this time in its even more rare Shiny form.

To catch the Shiny Celebi, one of the main protagonists of the next Pokémon movie, players must complete a new special research, but they won’t be working with Professor Willow this time around. They will be working closely with Team Rocket members Jessie and James, who are attempting to locate Celebi and use it for their own nefarious plans.

This special research includes catching and interacting with a variety of Grass-type Pokémon, growing closer with your Buddy, and hatching eggs. Just like in the games and in the anime, you will have to battle against Team Rocket numerous times, so make sure to stock up on Potions and Revives.

Jessie and James will also be returning in their infamous Meowth balloon to battle, and each have new parties with new Shadow Pokémon that can even be Shiny. Defeating this troublesome duo is crucial to completing the special research, since you won’t be able to get Shiny Celebi without fighting them a few times. But as we all know, Team Rocket always comes back for their target, so finding them during the event period shouldn’t be difficult.

Don’t fret if you cannot complete the special research within the event duration. If you start it during the event, you will have permanent access to it and will be able to complete the tasks at any time. Just be warned that Jessie and James only appear during special events and can’t be normally encountered like other Team Rocket grunts.

Players will be able to transfer their newly caught Shiny Celebi from Pokémon GO to Pokémon Sword and Shield through the Pokémon HOME software, but only if they have a sufficient amount of GO transporter energy to do so. Since Celebi is a Mythical Pokémon, and it happens to be Shiny this time around, it will require an entire bar full of GO transporter energy to be sent to Pokémon HOME.

The Pokémon GO event featuring aspects of the upcoming film Pokémon: Secrets of the Jungle will run until Dec. 17 at 10pm local time, but players will be able to continue the special research for Shiny Celebi permanently if they start it during the event period. No international release has been given for Pokémon: Secrets of the Jungle as of yet, but we are likely to look forward to the tale of the Mythical Pokémon Zarude, Celebi, and the mysterious child Coco in the coming year.