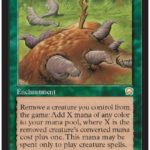 Among all the new Zendikar Rising spoilers revealed by Wizards of the Coast today, three additional Magic: The Gathering The List cards were previewed too.

The List is a curated list of 300 MTG cards that might be found within the new Set Booster. Containing Commons to Mythic Rares, The List is made up of “interesting cards from Magic’s past,” according to head designer Mark Rosewater. Each Standard set released will feature a new The List, containing cards found throughout the last 27 years of Magic.

Only Set Boosters will contain The List cards, which aren’t on MTG Arena. Some cards on The List may make their way to the Historic format over time, according to Rosewater, but not for the launch of Zendikar Rising.