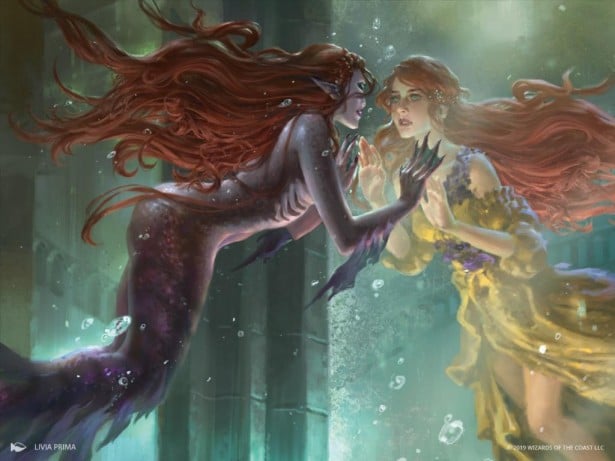 Throne of Eldraine (ELD) is Magic‘s newest set and it’s pulling no punches in twisting fantasy classics into dark versions of themselves. The latest victim is a Little Mermaid rip-off, Wishful Merfolk.

As a creature spell, Wishful Merfolk is pretty basic. As a 3/2 creature, she can get the job done in combat, although attacking will set you back.

At two mana, it’s probably more intended to be a basic Limited building block to give blue decks some teeth in the early game. In multiples, Wishful Merfolk will be able to hold down the fort while blue decks build up their trademark alternative win mode, whether that means attacking in the air or more nefarious ends.

As a story, however, this card is a frightening twist on the classic tale of The Little Mermaid. Instead of wanting to walk on land to reunite with her true love, this red-headed stalker is intent on wronging those who wronged her in the past. Does this mean we’re in for some mermaid murder in the upcoming set?

Throne of Eldraine is set to be released digitally via MTG Arena and MTGO on Sept. 26 and via tabletop on Oct. 4.