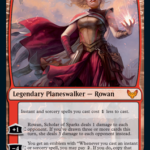 Strixhaven is home to some of the best young mages in the Magic: The Gathering multiverse, which now includes Will and Rowan Kenrith, the prodigal mages from Eldraine.

Strixhaven: School of Mages is scheduled to be released digitally on April 15 with a tabletop launch on April 23. The new set includes the return of the Kenrith siblings, who first appeared in Battlebond and had their character’s fleshed out in Throne of Eldraine. The characters have been tied to each other in some way through their cards.

In Battlebond, Will and Rowan Kenrith were Partner commanders. The pair were consolidated into one card in Throne of Eldraine as The Royal Scions.

In Strixhaven: School of Mages, the two will be represented on both sides of a modal double-faced Planeswalker card. Rowan, Scholar of Sparks // Will, Scholar of Frost is a continuation of the recent cycle of MDFCs that started in Zendikar Rising.

Both sides have the same static ability, which helps you storm off with spells. This MDFC Planeswalker is a versatile card that can fit into a variety of game conditions.

Will, Scholar of Frost is better in a control-based matchup. Both of his primary abilities help you find your answers in different ways. The plus-one ability gives an attacker zero power which buys some time in an aggro matchup. The minus-three loyalty to draw two cards is a decent ability that helps break parity.

Rowan, Scholar of Sparks is an aggressive three-mana Planeswalker that thrives in a faster matchup with its direct damage abilities and an ultimate that gives you a powerful emblem that copies spells.

Both sides work well together. If you already have Will, Scholar of Frost on the battlefield, you can just play Rowan, Scholar of Sparks if you draw an extra copy. The versatility of MDFCs is proven to be game-changing in Kaldheim and Zendikar Rising and shouldn’t be any different in Strixhaven: School of Mages.

The Strixhaven: School of Mages set will launch digitally on April 15 with a tabletop release scheduled for April 23.