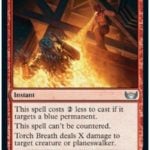 A cycle of five color hosers that are Instant and Sorcery speed spells return to the Magic: The Gathering Standard format with the release of Streets of New Capenna, targeting specific colors for a reduction in casting cost.

Color hosers within MTG are designed to punish an opponent for playing a specific color in their decks. Players don’t often main deck a color hoser and instead keep them in the sideboard for facing certain matchups. Color hosers in Streets of New Capenna (SNC) are different from previous Magic versions and can target a wider variety of decks within the Limited format.

Each of the New Capenna color hosers is either an Instant or Sorcery spell. They all have a rarity of Uncommon and a reduced casting cast when targeting a specific MTG color. The SNC set is a three-color set, showcasing five three-color archetypes within the New Capenna Limited format. This increases the chance for the color hosers to have a reduced cost, but it still doesn’t make them a top pick in Draft.

Found in the MTG color White, Knockout Blow deals four damage to a target attacking or blocking creature while you also gain two life points. The Instant White spell targets the color Red, reducing its casting cost from 2W to W. Holding up one mana isn’t hard in a Limited format, making Knockout Blow a solid form of removal when it can target a card that has Red in it.

Out of the Way

Out of the Way is a Blue Instant speed spell that returns a target nonland permanent an opponent controls to its owner’s hand. It also draws a card. Out of the Way targets the MTG color Green, potentially bouncing a big creature back to hand or removing a pesky token from play. On its own, the Blue Instant costs 3U to cast. When targeting a card with Green, it has a casting cost of 1U.

The New Capenna Limited format contains the Brokers faction, a family that uses Shield Counters to protect creatures from damage. Whack gets around those pesky Shield Counters via its ability to grant a target creature -4/-4 until the end of the turn. It’s a very expensive Sorcery speed spell at 3B but has its cost reduced by three when Whack targets an MTG creature that has the color White.

Targeting the MTG color Black, Bouncer’s Beatdown deals “X” damage, where “X” is the greatest power among creatures you control. The Green Instant costs 2G normally, and only G when targeting a black card. Bouncer’s Beatdown is a narrow removal spell, though, and will only work in a creature-heavy deck.

Torch Breath is likely the best of the five mana hosers in SNC. It targets the color Blue and can cost two less to cast. Torch Breath deals “X” damage to a target creature or planeswalker where “X” is the mana you pay(XR). The Red color hoser will likely make it into a number of sideboards within the Standard format. And in New Capenna Limited, Torch Breath has the potential to be a powerful form of removal in a format that is low on quality removal spells.