Tymaret and Callaphe join the demigod squad in Theros: Beyond Death 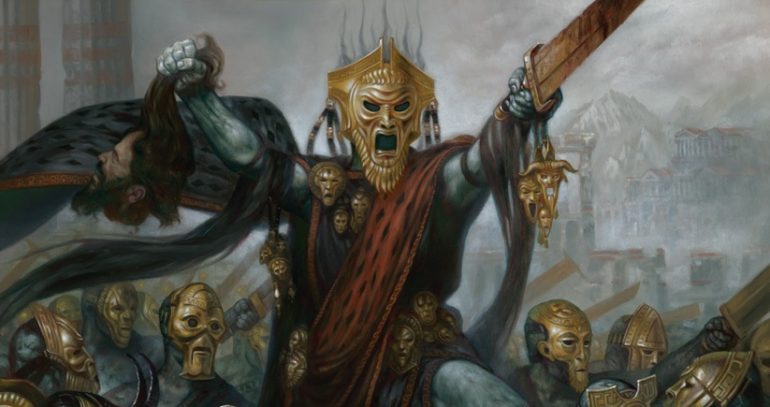 Two new demigods were spoiled this week for Magic: the Gathering‘s newest set, Theros: Beyond Death (THB). Callaphe and Tymaret are officially joining the ranks of Theros’ pantheon.

Tymaret (who coincidentally has the most badass nickname in the game, “Murder King”) is the set’s black demigod, a legendary enchantment creature. Previously in Rakdos colors, Tymaret now plays fully into the black devotion archetype.

As a two-drop, he has a scaling toughness and, with enough support, can be your team’s best blocker. His activated ability is also pretty great—exiling cards from graveyards has bonuses in THB due to the escape mechanic. Gaining life isn’t a bad bonus, either.

The second of the two cards was spoiled only in Italian, so here’s the rough translation for Callaphe, Beloved of the Sea:

“Callaphe, Beloved of the Sea’s power is equal to your devotion to blue.
Creatures and enchantments you control have ‘Spells your opponents cast that target this permanent cost 1 more to cast.'”

Callaphe is a powerful creature that immediately brings echoes from Throne of Eldraine‘s Syr Elenora. With power equal to your blue devotion, Callaphe can quickly become a blue beater within the right deck.

Her second ability, which makes spells that target your resources more expensive, is particularly useful. But its broad application can be a pretty harsh tax that opponents may forget to plan around, giving you a significant edge up.