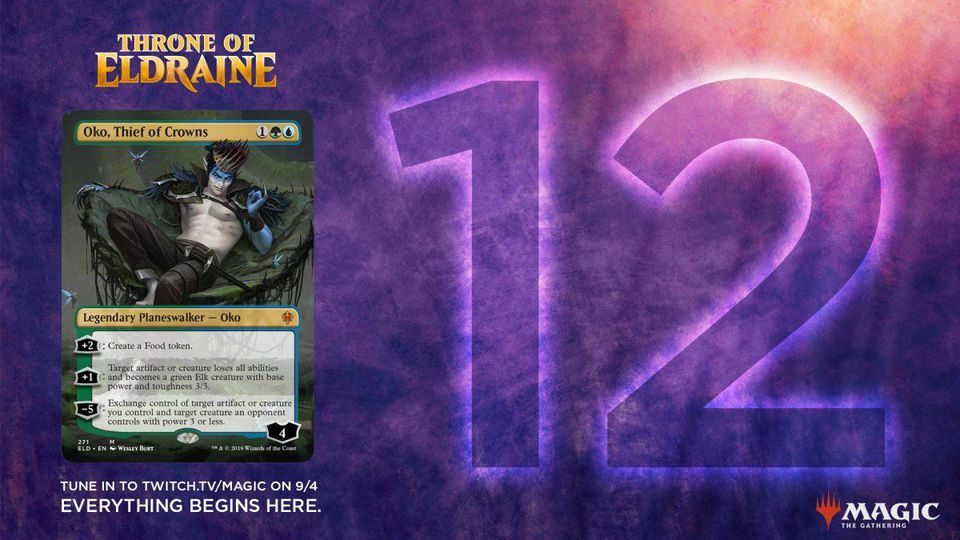 Magic: the Gathering‘s newest set, Throne of Eldraine (ELD), had its first planeswalker revealed today. Oko, Thief of Crowns is a fey planeswalker that will headline the upcoming expansion and may have a larger role in the game’s overall design and story. Oko’s card reveals much about his character and hints at some upcoming mechanics as well.

As a three-cost planeswalker, Oko should be a powerful addition to any Magic arsenal, able to come down early and affect the board. He also lands with four initial loyalty, meaning he’ll be hard to get rid of.

His first ability adds a mysterious Food token to the battlefield. The lack of descriptive text is notable, meaning that Food tokens will be a key mechanic for the set (key mechanics don’t get descriptive text on Mythic cards). Developer Wizards of the Coast has yet to reveal any information on what Food does, so get your guesses in now.

The second ability plays well into Oko’s playful trickster theme, swapping something good your opponent has for a deer. While not ideal removal as it leaves a 3/3 body around, the fact you can do this every turn while buffing Oko’s loyalty means if you can deal with the deer horde, you’ll be able to quickly close out the game.

The final ability looks relatively underwhelming, as it’s limited to stealing something with power 3 or less. Of course, if Food is an artifact, it would lead to this kind of interaction:

Is Oko some sort of deer-swapping madman?! What exactly does Food do?! Will you be able to eat the Food if you get hungry while playing Magic? We’re going to have to wait until a special announcement tomorrow.