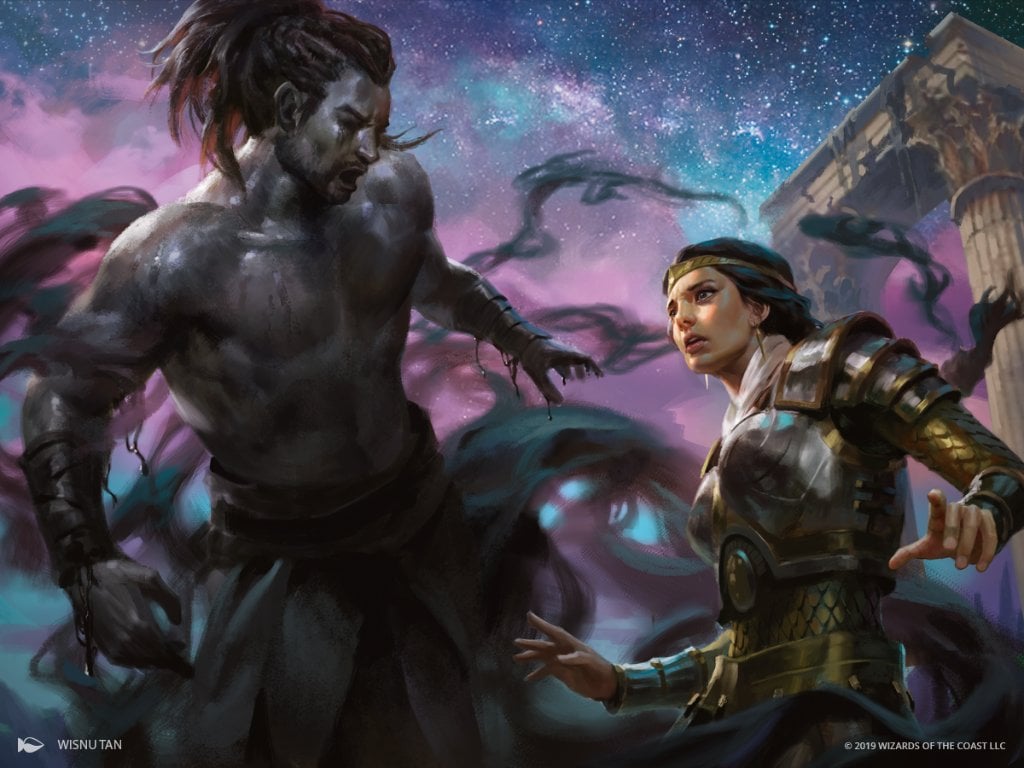 Theros: Beyond Death arrives on Arena this week and in card stores next week, meaning now’s the perfect time to learn the top Limited cards the set has to offer. Here’s the best (and worst) THB cards for Limited.

There’s a reason Gray Merchant of Asphodel was moved to uncommon from its place in Theros as common. This card is a house and will always provide a massive life swing when it hits the battlefield, if not ending the game on sight. Pair him with other black permanents to boost that devotion and you’re in for a fun time.

Drag to the Underworld

As Black is the best color at creature removal, Drag here is the best in the business, and does a lot of work at a relatively cheap price, even before the discount. Take special note that this is instant-speed removal in a set packed with powerful Auras—for the best value, kill the target of an Aura while it’s still on the stack for an easy two-for-one.

Final Death is more expensive than Drag to the Underworld, but it gets around a key problem of Drag: indestructible creatures. THB has eight rares and mythics that can gain or have this ability, and there’s also a combat trick with it, Karametra’s Blessing. Final Death is one of Black’s only ways to get around these cards, and will be a critical card to pick up.

Mire’s Grasp is another way to get around indestructible, but only if the creature has three power or less. This also can just stick around, hindering a creature significantly if that’s what you need to do. Take special note that Mire’s Grasp plays extremely well with cards that bring enchantments back from the graveyard – use it to kill an opponent’s creature, then get it right back to double up the value.

Pharika’s Spawn is a decent card…at first. But once it escapes from your graveyard, it just gets so much better. As a six mana 5/6, it’s also decent, but its second ability is all the more valuable. Forcing a sacrifice turns this card into a brutal machine. And the best part is, if they kill it again, you can just bring it back again for more and more value.

Sagas can sometimes be hit-and-miss, especially across all their abilities – but Elspeth’s Nightmare does a lot of things right. At best, this kills a creature, rips something valuable from your opponent’s hand, and then removes a graveyard full of Escape candidates. Even if one (or two) of those modes aren’t particularly useful in a specific game, at a cost of three mana, this enchantment is more than worth main-decking.

Perhaps not as powerful as Pharika’s Chosen, Underworld Charger has the benefit of being at a lower rarity. This horse also has a cheaper escape cost, meaning it’ll be easier to pull the trigger and could, in longer games, be paired with a combat trick or second creature. A recursive 5/5 for five mana is a solid deal in any Black deck.

There is one reason to play this card and it is Gray Merchant of Asphodel. It will eventually win you a game, I suppose, but it’s definitely not worth taking up your third turn to cast. Add that you’ll be hard-pressed to cast this in the early game of any dual-color deck, and it’s hard to see any Limited playability.

Grim Physician is just too small to make any sort of impact. It serves as good sacrifice fodder, but only lowering the toughness of another creature by 1 is terrible. Careless Celebrant is just so much better than Grimmy here.

I don’t know who Tizerus is but he needs to get some better fruit. This may, over the course of a game, drain an opponent’s life by 4 or even 6, but at no point does this help you get the rest of the way there. Without any sort of board impact or presence, this card can safely be written off as draft dud.