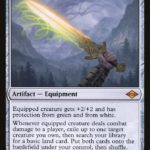 Cycles are a core part of Magic: The Gathering set design. Cycles are different colored cards with similar effects around a specific theme.

In the most recent set, Innistrad: Midnight Hunt, the Mythic Rare adversary cycle is an example of a cycle. Each card has a similar enter-the-battlefield ability that changes based on the color’s identity.

The Mirran swords cycle debuted in Darksteel in 2004 with Sword of Fire and Ice and Sword of Light and Shadow.

The cycle has some competitive success but is notable for its power level in Commander. Each sword has its applications, but there are a few that stand out above the rest.

Here are the best swords in Magic: The Gathering.

Sword of Fire and Ice

Sword of Fire and Ice shows up in Legacy midrange strategies. Decks like B/W Death and Taxes take advantage of the protection from Red and Blue to deal with a wide range of decks. Many of the best decks in eternal formats run Blue and Red. The triggered ability directly affects the battlefield by dealing two damage to any target. This is enough to take out utility Creatures and a host of aggro threats. The trigger isn’t dead in a control matchup because you also draw a card.

This is also the most notable sword from the cycle with multiple reprints in masters sets and a Kaladesh Invention masterpiece printing.

Sword of Body and Mind

Another Blue-hate sword, Sword of Body and Mind gives the equipped Creature protection from Green and Blue. Ideal in midrange strategies, the triggered ability gives you a 2/2 body. This is an impactful ability because it gives you a blocker to fend off opposing threats. The mill ability on this Equipment won’t win the game often because the incidental mill usually isn’t worth it, especially with the prevalence of graveyard strategies in eternal formats.

Historic mages can use this card in Arena with its inclusion in Historic Anthology 4. The card has failed to gain any traction in Historic. It can be found in the stray Green midrange lists but isn’t suited for a fast, turn-five format like Historic. Sword of Body and Mind is worthwhile in Modern and Legacy decks.

Sword of Feast and Famine

Sword of Feast and Famine is a Commander all-star card. Protection from Black helps your Creature evade most of the key removal spells in Commander. The triggered ability enables massive post-combat main phase plays. Being able to untap all lands you control doubles the potential mana you can use in a turn. One hit from a Creature equipped with Sword of Feast and Famine and you become the biggest threat at the table. The discard trigger is also relevant, especially in Legacy and Modern where you’re only dealing with one opponent.

Sword of Hearth and Home

The latest card in the cycle isn’t as generically good as the other entries on this list. But what Sword of Hearth and Home lacks in raw power, it makes up for by being an excellent card when built around.

Sword of Hearth and Home works best in a deck that’s filled with blink synergies. For Commander, this card is strong in a Brago, King Eternal or Yorion, Sky Nomad deck. The triggered ability blinks a Creature and fetches a basic land card from your deck. The basic land is nice, but the real power comes from the blink effect.

In a dedicated blink deck, Sword of Hearth and Home enables you to get multiple enter-the-battlefield triggers in a turn because the on-hit triggered ability doesn’t require mana. You can attack, blink a Creature, then cast Cloudshift and blink that same Creature again.