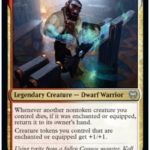 Players can quickly take down opponents with an RW Aggro build while playing Draft or Sealed in the Magic: The Gathering Kaldheim Limited format.

The Aggro archetype in MTG punishes opponents early and seeks to hit lethal without taking a match into the late-game stage. An RW Draft deck in Kaldheim succeeds by dropping cheap creatures in conjunction with a go-wide strategy. The new KHM mechanics Boast and Foretell synergize nicely with an RW Aggro build, along with a few Equipment and aura cards. RW builds also utilize removal and combat tricks, but they shouldn’t be the main focus.

Here are the best RW Aggro cards to build around in Kaldheim Limited.

Koll, the Forgemaster is the KHM Draft Legend for RW. The dwarf warrior has a CMC of RW and is a 2/2. Koll is a solid pick to build around as his primary ability lets a player return an enchanted or equipped nontoken creature to hand upon death. Koll, the Forgemaster also pumps tokens that are equipped or enchanted with an additional +1/+1. It synergizes best with Dwarven Hammer, which can produce a 6/1 dwarf berserker with Trample. 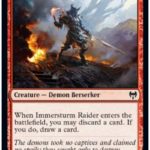 Low-cost creatures are early drops onto the battlefield that curve into creatures with powerful abilities and stronger stats. Taking a mulligan isn’t recommended when playing in the Limited format, which is why Immersturm Rider is a solid two-drop in RW. The dwarven berserker offers the option to discard a card to draw a card upon entering the battlefield. It can also provide an advantage when mana starved or flooded during the mid-game.

The best low-cost creature to grab for an RW build is Codespell Cleric. It’s 1/1 with Vigilance who creates a +1/+1 counter to put on a target creature when a second spell was played in the same turn. Codespell Cleric can either hit for one damage on turn one or pump creatures in the mid and late-game. 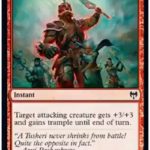 Run Amok is a solid two-drop Instant that pumps an attacking creature with +3/+3 and Trample. It synergizes with Codespell Cleric as a second spell played that turn, pumps low-powered creatures in the mid to late game, and can hit for lethal.

Kaya’s Onslaught is another viable combat trick, pumping a target creature +1/+1 while also giving it the keyword Double Strike until the end of turn. Players can also utilize the Foretell mechanic, allowing a player to split up its cost. Combat tricks are situational, meaning they’re better at lower costs. By using Foretell on Kaya’s Onslaught, players can cast the combat trick for a single White mana. 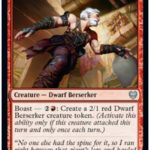 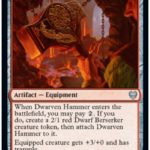 Dwarven Hammer is by far the best Equipment to grab for an RW Aggro build. Players can pay an additional two mana of any color to its casting cost of 2(R) and it automatically attaches itself to a created 2/1 dwarf berserker token. With the +3/0 and Trample from Dwarven Hammer, the token becomes a 5/1. And when it dies, the Equipment remains.

Valkyrie’s Sword is another solid Equipment option, creating a 4/4 angel warrior token with Flying and Vigilance when an additional 4(W) is paid upon playing. It Equips a creature for +2/+1 and automatically attaches to it upon entering the battlefield, creating a 6/5 Flying and Vigilant token. 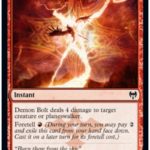 Demon Bolt is a solid Instant speed removal that deals four damage to a creature or planeswalker and has Foretell. Squash works well too, but only if there are changelings or giants within the build. There’s the aura enchantment Bound in Gold that silences everything on a target card except for static abilities. White also has Iron Verdict, an Instant that deals five damage to a target tapped creature. Iron Verdict also utilizes Foretell.