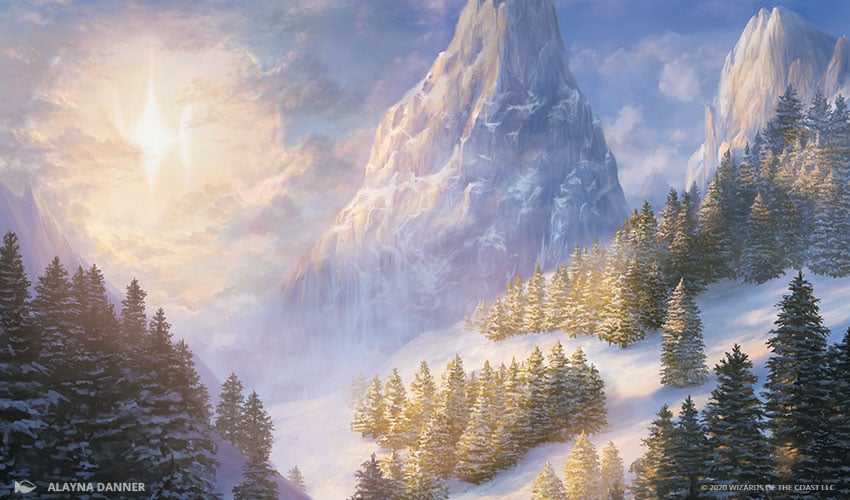 Kaldheim, the newest Magic: The Gathering set, brings a plethora of new lands to the game with the return of Snow lands and double-faced land cards.

Though land is the most important resource in all of magic other than your life total, Kaldheim brings a combination of land that can optimize your color efficiency and provide end-game utility in limited formats.

While we maybe shouldn’t consider these to be the “best” land cards of Kaldheim, it’s worth keeping in mind that all basic land cards in the set are “Snow lands.” Each basic land card has two different arts to go with it.

Additionally, there are dual-colored Snow lands for each color pair, totaling 10. All of these lands come into the battlefield tapped with no special effect. They are all fetchable, however, assuming you’re playing a format that allows for fetch lands.

Introduced originally in Zendikar Rising, double-faced lands have been a staple of standard play since last September.

Prior to Kaldheim, however, there were only six color pairs that were represented by modal double-faced lands. That left out four color pairings. 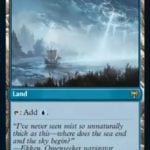 Unlike other “dual” lands, you can only tap these lands for one color once they’re played, but while they’re still in your hand, they represent a possibility for you to play either color of land that you need.

Expect to see four copies of these lands in just about every deck where the colors fit in constructed formats.

Kaldheim is also bringing two handfuls of lands with sacrifice effects. Each color pairing in the game has one land in the set that can be tapped and sacrificed to provide a specific utility.

Each ability costs different amounts and types of mana depending on their effect. Most of the abilities aren’t groundbreaking, but many will be worth throwing into your EDH deck, and some might save you in a Limited format.

Gates of Istfell stands out as one of the lands that will certainly provide you some late-game utility if you’re in a competitive sealed or draft event. Once you and your opponent have resorted to top decking for answers, the Gates could be yours. For two generic mana, one white, and two blue, the card allows you to gain a little bit of life and get some card advantage on your opponent.

Great Hall of Starnheim will also be an asset in Limited formats. For two white and one black, the land can be sacrificed for a 4/4 Flying Angel Warrior with vigilance. Perfect for turning the battlefield in your favor.

Gnottvold Slumbermound serves a similar purpose. As the red and green pairing, the land can be sacrificed to make a 4/4 Troll Warrior with trample. But this effect is more costly, requiring six mana in total.

If you’re getting overrun by an aggro deck that has a lot of creatures with two toughness, Surtland Frostpyre could save the game for you. Sacrificing it not only allows you to scry two, but it deals two damage to every creature, effectively board-wiping those hyper-aggressive deck builders who end up with completely empty hands by turn five.

Littjara Mirrorlake will help you put pressure on your enemy if you have a high-threat creature card on the battlefield. For five mana, the card can create a copy of that creature and put a +1/+1 counter on it.

If your opponent killed your biggest threat already, fear not. Port of Karfell will be able to return your powerful creature to the battlefield late in the game by sacrificing it for six mana in total including one blue and two black.

Faceless Haven is the lone land in Kaldheim that can be turned into a creature. By paying three mana from Snow lands, which there are plenty of in this set, the land will become a 4/3 creature with vigilance.

Having vigilance means that not only can you use Faceless Haven to attack your opponent, but after the fact, you’ll still be able to use it to generate mana.