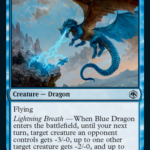 Blue is one of the best support colors in Magic: The Gathering Limited. For what it lacks in aggressive Creatures or direct removal, it makes up for in accruing value throughout the game, leading to a late-game advantage.

In Dungeons & Dragons: Adventures in the Forgotten Realms, Blue has many of the usual staples in Limited. Counter spells, tapping down and bouncing Creatures, and reducing power are all in the set, but with a Forgotten Realms flavor.

Blue has a handful of Venture spells, but specializes in supporting dice-rolling strategies. There are several standard spells that have d20 rolling stapled upon them. While most Blue players won’t like the randomness of dice rolling, many of the Common and Uncommon Blue spells generate value regardless of what you roll.

Here are the best Blue Commons and Uncommons in Adventures in the Forgotten Realms Limited.

This Uncommon Creature enables Venture and is an effective blocker. The three-mana card Ventures when it enters the battlefield. The key to this card is the four-mana activated ability that bounces it to your hand. This is a repeatable way to Venture. It also is a solid threat with three power. It can block, then use its activated ability, saving the Creature and allowing you to Venture next turn.

This is one of the best Commons in the set. Pixie Guide lets you roll at advantage, meaning you roll an additional dice and ignore the lowest roll. This raises the chances of rolling a higher number. Pixie Guide is no slouch as a Creature, with a 1/3 Flying body.

Power of Persuasion provides good value regardless of the number you roll. This is a good tempo play that can be a surprise finisher if you roll a 20. A 10-19 roll is the sweet spot for this card. Placing a Creature on the top or bottom of the opponent’s library is powerful. Putting the Creature on top will blank their next draw, and placing it on the bottom could be better than destroying it in some games.

This card is big and hard to remove. That’s about it. This is effective, however, when fighting off aggro decks that want to attack with small Creatures. Rimeshield Frost Giant is big enough to help stall the game while you generate card and tempo advantage, eventually finding your finisher and closing the game out. Ward 3 should not be overlooked.

You Find the Villains’ Lair

The modal spells in AFR are great and turn typically weak Limited effects into playable cards. You Find the Villains’ Lair is a standard 1UU counterspell with a great second ability. You can also cast this card to draw two cards, then discard two cards.

Whatever the situation is, You Find the Villains’ Lair will be a useful spell in your Blue deck.

Feywild Trickster isn’t exactly Roost of Drakes from Zendikar Rising, but it is pretty close. Getting a 1/1 Flying Creature every time you roll a dice is a strong engine. This is a vulnerable Creature, but will demand removal before it takes over the game.

Blue Dragon is a great finisher for Blue decks. The seven-mana Dragon is expensive, but the effect can lead to game-winning attacks. When Blue Dragon enters the battlefield it reduces the power of three Creatures your opponent controls. With a hefty 5/5 body, Blue Dragon will need an answer or should quickly end the game.