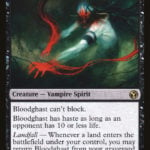 Vampire cards in Magic: The Gathering have mediocre stats but provide a number of powerful effects to make up for them.

Every expansion, new vampires are added, so keeping up a vampire-themed deck to compete is quite easy. Here are the five best Vampire cards in MTG.

Bloodghast is a two-cost creature which you can resurrect from your graveyard every time you play a land. While he does have only 2/1 stats and cannot block opposing creatures, he has Haste if the opponent has health of 10 or less. You can easily play multiple of them from your graveyard to burst down an unaware opponent if their health pool is low enough.

With no restriction on resurrection, you can easily spam them every turn from your graveyard to deal damage to your opponent or opposing creatures.

Elenda, the Dusk Rose is a four-mana legendary creature requiring you to have both white and black mana. While she has weak stats of 1/1 only, she quickly grows in power for every other creature which dies with +1/+1 counters. This power is not restricted in any way and you can pop a wide board of tokens and run them into the opponent to quickly buff her up.

If she is removed, worry not. Her second ability comes into play, featuring a wide board of 1/1 vampires with Lifelink to help you regain health.

Drana, Liberator of Malakir is a cheap three-cost legendary creature with decent 2/3 stats. She has two great effects of Flying and First Strike, allowing you to survive encounters with creatures early on before you buff her up. On top of that, if she is not blocked by a creature and deals damage to opposing player, she can buff up your board with +1/+1 counters, allowing you to creature a powerful board from nothing just by attacking with her.

Edgar Markov is a six-mana cost legendary vampire with mediocre 4/4 stats, but he bears powerful effects. The first ones are First Strike and Haste, which allow you to do damage as soon as you play on him and potentially avoid lethal damage if blocked. When he attacks, you put +1/+1 counters on all Vampires, including himself. The last important effect is that you can create a wide board by using Vampire spells.

Vampire Hexmage is a simple 2/1 two-cost Vampire with First Strike, which is quite decent for such a cheap drop. But her strength comes from her effect which allows you to sacrifice her to remove all the counters from a target permanent.

This effect can be activated at flash speed whenever you want, even during your opponent’s turn, making her one of the most versatile Vampire cards.