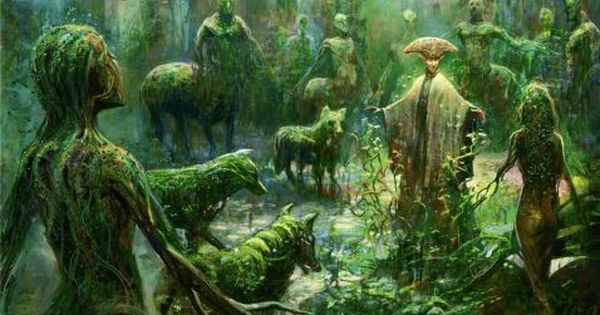 Populate cards in Magic: The Gathering are unique only to the White and Green factions. The effect allows you to create a token copy of a creature you already control and expand your board out of control.

One major downside of the Populate mechanic is that you need a token to make it work. The upside, however, is that it allows you to copy your powerful tokens and overwhelm your opponent, which makes Populate cards worth adding to your deck.

Here are the best Populate cards in MTG.

Vitu-Ghazi Guildmage is a two-mana card requiring both one Green and one White mana. You can use additional mana to quickly develop a board. A six mana cost will give you a 3/3 creature and a four mana cost will allow you to copy the token. If you use this in the late game, you can easily build a strong board and overwhelm your opponent.

With a two-mana cost, Druid’s Deliverance is one of the best Instant spells in the game. It allows you to prevent all combat damage you’d take while also copying a token you control. It can be used when the opponent wants to go for a lethal kill by saving your creatures and using this spell while also developing your board. With the additional token, you might be able to turn around the game.

Growing Ranks is a four-mana cost enchantment that allows you to Populate every turn. While it does require some creatures to copy, you can easily start developing the board once you play it. While the four-mana cost might seem expensive at start, this card is mostly aimed at playing into the later stages of the game when you already have a board.

Sundering Growth is a two-mana Instant that allows you to remove Artifacts or Enchantments and then Populate, giving you the possibility to get rid of key cards your opponent controls and turn the game around by developing a board.

Trostani, Selesnya’s Voice is a four-mana cost and requires two Green and two White mana. Once played, it allows you to gain health for each other creature summoned while Trostani is on the battlefield. On top of it, you can pay three mana each turn to Populate, giving you the possibility to survive huge amounts of damage while also developing a board.