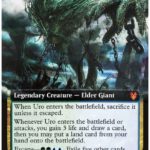 Escape cards in Magic: The Gathering allow you to cast them from the graveyard for the cost of exiling a certain number of cards.

Wizards of the Coast introduced these cards during the Theros Beyond Death set. The keyword can be found in all colors but is most prominent in black or red. To benefit from this effect, you need to have a couple of cards in the graveyard. Escape creatures or spells usually have additional effects, such as +1/+1 counters, if the keyword is triggered.

Here are the five best Escape cards in MTG.

Kroxa is a cheap two-mana Legendary Giant that sacrifices itself upon entering the battlefield unless it had Escaped. The Escape cost of four mana makes it decent regardless since the 6/6 stats are great for its cost. The only downside is that you need to have five cards in the graveyard to exile if you want to play it early on, which might prove to be difficult.

One the biggest upsides of Kroxa is that its second ability to force your opponent to discard a card or lose three life is activated both when discarded as a two-mana and when it’s returned to battlefield for four.

Polukranos is a four-mana Legendary Hydra that enters the battlefield with six +1/+1 counters. If it escapes, it receives 12 +1/+1 counters instead. That makes it quite powerful considering it has only a six-mana escape cost.

This card can help you take care of enemy Deathtouch creatures due to its second ability which prevents damage and removes +1/+1 counters instead. If your opponent has a threat on board that you don’t have removal for, you can use its third ability to instantly fight that creature.

Ox of Agonas is a great refill creature for aggressive decks that dump all their hand to win the game early on. It discards your hand, then allows you to draw three cards. With no cards in your hand, it’s a five-mana, draw-three cards creature. On top of it, it has a cheap two-mana cost Escape cost, requiring eight cards to be exiled from your graveyard.

Uro is a cheap three-mana Legendary Giant that sacrifices itself unless it Escaped. He has a great second ability, giving you three life, a card, and a land from your hand onto the battlefield. This effect can be reactivated when you attack or Escape it, allowing you to build a huge advantage if Uro is left uncontrolled.