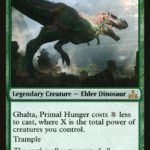 Dinosaur cards in Magic: The Gathering are powerful and beefy creatures which usually have Trample to do excess damage to the opponent.

There are plenty of Dinosaurs to choose from to strengthen your deck. While some provide powerful effects from the get-go, others might need some time before they can unleash devastation on your opponent. Due to this, it might be difficult to choose the best Dinosaurs to play in your deck, so we’ve listed the most powerful creatures which you should include in your decks.

Here are the five best Dinosaur cards in MTG.

Ghalta, Primal Hunger is one of the more expensive Dinosaur cards, but its 12 mana cost can be reduced if you have a lot of power on board. He is one of the strongest creatures with 12/12 stats and his Trample ability allows him to deal the excess damage to your opponent, giving them a difficult choice between blocking with a cheap creature or just letting it pass through for a lot of damage.

Overall, Ghalta is a great Dinosaur and should be included in your Dinosaur tribal decks due to how powerful it is.

Etali, Primal Storm is a six mana 6/6 Dinosaur with great stats even without its additional effect. But the additional effect that allows you to exile the top card from you and your opponent every time you attack with it elevates it to another level. If you have some Scry effects, you can easily make the next draw without having to spend its mana, but even without Scry, being able to play nonland cards without a mana cost allows you to have explosive turns.

Zacama, Primal Calamity is another expensive Dinosaur with 9/9 stats and great abilities. For start, it has three keywords in Vigilance, Reach, and Trample, allowing you to attack and defend every turn alongside blocking opposing Flying creatures. When you play it, you immediately regain all your mana back due to its effect, allowing for powerful turns. On top of that, this card has various abilities for a three-mana cost to deal damage, destroy an artifact, or regain life.

Gishath, Sun’s Avatar is an amazing Dinosaur for it’s eight-mana cost, boasting 7/6 stats and three keywords such as Trample, Vigilance, and Haste. On top of it, if you deal combat damage to the opponent, you can look at the top of your library and summon Dinosaur creatures revealed onto the battlefield allowing you to create a wide board which might prove to be to difficult for your opponent to deal with.