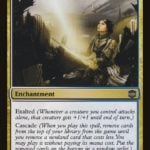 In Magic: The Gathering, there are some mechanics that aren’t generally successful in high-level competition but have found a home in decks that look to do the biggest, most explosive move possible. Cascade is a keyword that lets you cast one spell and roll that into another spell with lesser mana value.

Here’s the official reminder text for cascade: When you cast this spell, exile cards from the top of your library until you exile a nonland card that costs less. You may cast it without paying its mana cost. Put the exiled cards on the bottom of your library in a random order.

Cascade will occasionally break into the metagame as the centerpiece of a powerful combo deck. The most recent iteration is the Modern Valki Cascade deck that prompted Wizards of the Coast to change the rules text of cascade. Despite the rules change, cascade still has plenty of solid applications in every Magic eternal format.

Here are the top five cascade spells in Magic.

Bloodbraid Elf is a solid utility creature that shows up in Modern Cascade decks. At four mana value, the aggressive elf has a wide range of spells it can find with cascade. Some cascade creatures struggle to justify their cost with a weak body, but a 3/2 haste threat makes Bloodbraid Elf a decent option.

This five-mana beast of an enchantment is powerful enough to make up for all the hoops you have to jump through to cast it. Giving the first spell each turn cascade is enough to outright win the game with the card advantage and large battlefield the ability could develop. Maelstrom Nexus isn’t a mainstay in hyper-efficient cascade decks, but it’s a fun and powerful inclusion in a homebrew.

Slivers is one of the most-beloved tribes in Magic. These creatures provide buffs to all other slivers. Older sliver cards will give buffs to every sliver, but newer ones only provide buffs to slivers you control. The First Sliver was released in Modern Horizons and gave Modern Slivers and Commander decks a new, explosive five-mana card. This 7/7 has a strong body and an even stronger effect. Giving every sliver cascade is a quick way to flood the battlefield with increasingly dangerous creatures. The First Sliver is a staple commander for sliver decks and is often a one-of card in Modern Slivers.

Ardent Plea is a utility enchantment that can immediately affect the battlefield with its cascade trigger and remain useful throughout the game with exalted. There are decks that use Ardent Plea as a source of devotion to enable the Theros gods.