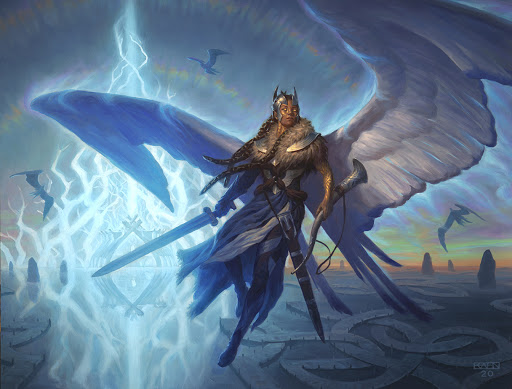 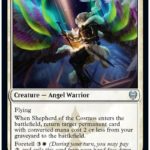 Angels are Flying creatures with powerful abilities in Magic: The Gathering that can turn the tides of a match in your favor.

They’ve been a part of MTG since its inception and have various abilities, such as empowering other creatures or restricting your opponent from casting various effects. The upcoming Kaldheim set is adding a couple of Angels that should easily fit into your decks.

Here are the best five Angel cards in MTG: Kaldheim.

Shepherd of the Cosmos

See Sheperd of the Cosmos on Amazon

Shepherd of the Cosmos is an expensive six-mana cost Angel with mediocre 3/3 stats, but he allows you to return a permanent card with a cost of two or less from the graveyard onto the battlefield. If set up on an earlier turn with Foretell, you can surprise your opponents with interesting combos, such as Kaya’s Ghostform in the Historic format.

This three-mana cost Angel has a statline of 2/4 alongside Flying. If you have multiple of them out once you have a health required to activate its effect, you can buff up your creature to +4/+4 or more.

It synergizes well with the upcoming Youthful Valkyrie, which gets buffed up with +1/+1 for every other Angel entering the battlefield. These two cards combined make up a solid early-game board. This card can buff itself up, making it a Flying Angel with 4/6 stats for a three-mana cost.

Stalwart Valkyrie is a solid 3/2 Angel with Flying that can be summoned on the second turn if you played a creature on turn one. Its original cost of four mana might be too high, but you should be easily to cheat it out by exiling a creature from your graveyard instead.

This is a great card in Limited, similar to Bone Picker, and will fit into various Standard decks as well.

Vengeful Reaper is a mono-black Angel, costing four mana for 2/3 stats and three effects: Flying, Deathtouch, and Haste. It’s a similar creature to Vampire Nighthawk with an additional one-mana cost. The foretell effect allows you to surprise your opponent with Haste and Deathtouch, taking down powerful creatures your opponent might throw at you.

You could play this early to stop your opponent from attacking with creatures while you build up a board.

Eradicator Valkyrie is another monoblack Angel with 4/3 stats and powerful effects for a four-mana cost. It’s strong overall, but its three toughness makes it quite vulnerable to various three-damage spells. The hexproof from planeswalkers should help her survive various effects early on and while she looks similar to Rankle, Master of Pranks, her Lifelink ability should help you stall the game a bit if you’re running into some trouble.