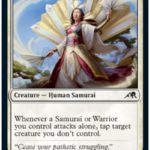 Kamigawa: Neon Dynasty doesn’t take much gameplay inspiration from the previous three sets in the plane.

The original Kamigawa block wasn’t well-received from a mechanical standpoint with ideas like Splice, Bushido, and Soulshift not making a return to the 2022 revisit.

Bushido was the keyword for Samurai in the original Kamigawa block. The mechanic didn’t work well because of its reliance on blocking to trigger the ability.

Samurai in Neon Dynasty don’t have Bushido, but instead, synergize with Warriors and gain bonuses when a creature from these tribes attack alone. This Red and White aligned archetype is aggressive and wants to win through powering up a single creature with Equipment and Auras and swinging for lethal.

Neon Dynasty releases on Magic Arena and Magic Online on Feb. 10 with a full tabletop release on Feb. 18.

Three Samurai cards were revealed today that showcases the general game plan for these decks in Limited and Constructed.

Imperial Subduer is a decent Common that shows what Samurai are looking to do. This creature taps an opponent’s creature when a Samurai or Warrior of yours attacks alone. Attacking alone is difficult because an opponent can generally just chump block or double block and kill your attacker.

This card alleviates the issue a little by tapping down one blocker. Imperial Subduer should be a decent option in Limited as one piece of several triggers that happen when a creature of yours attacks alone.

Giving a creature +2/+1 is a good buff for an aggressive deck. It also can be attached to a creature early until you find the best threat to start attacking alone with; once you have that it’s cheap to move Ancestral Katana over to it.

It’s possible Red and White lists could play a wide board early and transition into a tall board in the late game.

Goro-Goro does a good job fitting into two main archetypes in Neon Dynasty: Samurai and Spirits.

Both tribes are represented heavily in Neon Dynasty and Goro-Goro is a good bridge between the two. The first ability is strong in an aggressive deck by giving your creatures haste. The real power comes from Goro-Goro’s second ability.

Samurai decks are going to have modified creatures. When a modified creature attacks, probably alone, you can pay five mana to get a 5/5 flying threat that’s also a Spirit if that becomes relevant. A 5/5 evasive creature will end the game quickly if not immediately answered.