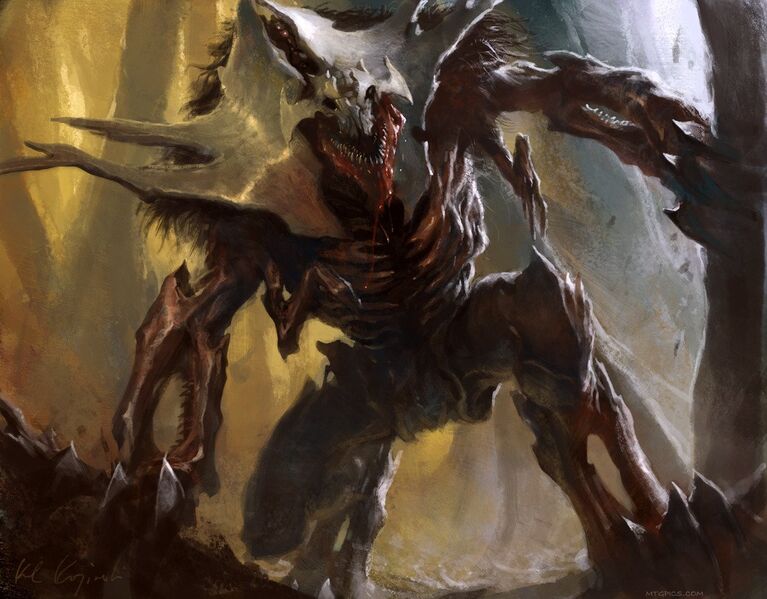 In addition to the return of a classic mechanic in Snow, Kaldheim will mark the official debut of one of Magic’s most powerful entities: Phyrexian.

At the end of the Kaldheim reveal stream today, Wizards of the Coast unveiled Vorinclex, Monstrous Raider, one of the five Phyrexian Praetors from New Phyrexia. Previously, the creature type Phyrexian was never included on cards, despite there being Phyrexian creatures throughout Magic’s history. Kaldheim brings the first Phyrexian creature to Magic with the new Vorinclex.

The showcase art of Vorinclex Monstrous Raider features the card written in Phyrexian, a fully developed language in the Magic universe.

The inclusion of Vorinclex in Kaldheim was unexpected to most of the community and has major implications on what Magic could include over the next year. The Phyrexians took over Mirrodin, making it New Phyrexia. With Nicol Bolas being defeated in War of the Spark, the Phyrexians could reveal themselves as Magic’s next villain over the next year.

The body on this card is good. Six mana 6/6 trample and haste is playable regardless of what else the card does. The ability to double your own counters is nice, but the second ability to half the counters of opponents, rounded down, is excellent. This card doesn’t need to fit in a counter-specific deck. The synergy between this and The Great Henge is already one of the more powerful combos in Standard. The ability to shut down all the incidental counters in Standard from Mono-White Aggro to Green/x in the mirror makes this a kill-on-sight type of card.

You can explore the power of Vorinclex when Kaldheim comes to Magic Arena and Magic Online on Jan. 28. The set’s full release is scheduled for Feb. 5.