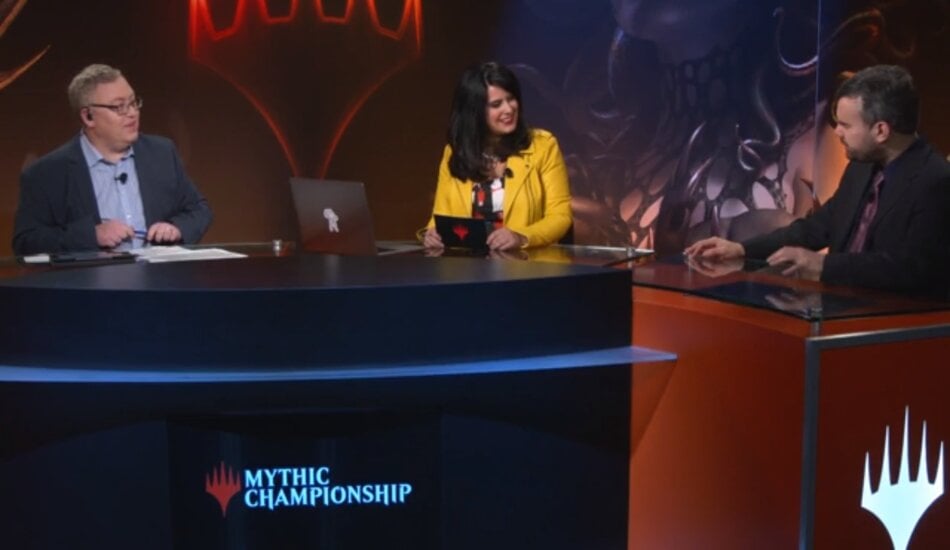 With a prize pool of $500,000 and an invitation to the Magic: The Gathering World Championship on the line, the top eight at Mythic Championship VI were ready to battle.

Food archetypes dominated the meta at Mythic Championship VI, but the tale changed with two Adventure decks in the top eight. The best Magic players in the world were playing Sultai Food, Simic Food, Golgari Adventure, and Selesnya Adventure.

The playoffs at Mythic Championship VI matches are played in best-of-five as opposed to best-of-three like the Swiss rounds from the first two days. Players aren’t allowed to access their sideboard until game three, giving extra value to cards that the Magic pros have put in their main deck.

Kicking off the first feature match of the day was an interesting pairing between Eli Kassis on Golgari Adventure against Oscar Christensen playing Sultai Food.

On paper, Sultai Food has a better win record over Golgari Adventure. The greatest advantage Adventure decks have is Edgewall Innkeeper, providing essential card draw when the creature side of the Adventure card is cast onto the battlefield.

Kassis started game one with an Edgewall Innkeeper and gained the advantage of the board state, drawing a Liliana, Draadhorde General to apply pressure towards Christensen. But Oscar also had the answers in his deck, casting Casualties of War to wipe out Kassis’ board state.

Golgari Adventure decks also have an abundance of removal to deal with the Food package of Oko, Nissa, and Hydroid Krasis—from Murderous Rider and Noxious Grasp to Massacre Girl and Liliana, Dreadhorde General.

Kassis won the first game and began the second in a similar fashion, drawing four extra cards thanks to Edgewall Innkeeper. Christiensen gained the advantage on the battlefield, with two Hydroid Krasis and several 3/3 lands thanks to Nissa. And a devastating board wipe by Massacre Girl from Kassis changed the tide of the game once again.

Heading into game three, Kassis was up on Christiensen 2-0. But now the players could access their sideboard. Christensen took full advantage of the sideboard access, winning games three and four.

With both players at 2-2 for the match, it would all come down to game five.

Christensen then dropped a Massacre Girl of his own that he pulled from the sideboard before the game, wiping the board clean to put pressure on Kassis. There was no coming back for Kassis and the win by Christensen would eliminate Golgari Adventures from the playoffs.

Winning three straight games in a row, Christensen moves onto the semifinals at MCVI.

On the side table, Louis Deltour (Sultai Food) was paired against Ondrej Stráský and his Simic Food deck. After competing in 20 Mythic Championships, this was Deltour’s first top eight. And for Stráský, winning MCVI would give him a chance at the Rivals League and a potential seat next year in the MPL.

Both players also wanted a shot at winning MCVI to earn a seat at the Magic World Championship, potentially propelling their pro careers to new heights. Deltour had the advantage over Stráský but the Czech Magic pro navigated the game brilliantly with one life point to come back and regain dominance over the battlefield.

And it would be Mass Manipulation that put the nail in the coffin, winning the game for Stráský.

Stráský found himself behind again in game four but Mass Manipulation and Gadwick, the Wizened that would save the day (stealing Oko and Nissa), moving the Czech pro into the semifinals at Mythic Championship VI.

Austin Bursavich was the number one ranked MCVI player heading into the quarterfinals, playing Sultai Food. Sebastian Pozzo has been in 18 Mythic Championships throughout his career, but this was his first top-eight finish playing Simic Food.

Pozzo took game one as the two Food decks battled it out on the side table match. He continued his domination over Bursavich in game two while the number one ranked Magic pro at MCVI found himself mana starved. And heading into game three, Pozzo was up 2-0 in the match.

The third game was a match of wits, with each player trying to control the battlefield via multiple Oko, Thief of Crowns. It also took forever to play. Bursavich lost the food generating planeswalker first, but after attacking, left Pozzo with only two life.

Pozzo stabilized, however, putting the pressure back on Bursavich. And the pendulum would swing again, with Bursavich top decking two Hydroid Krasis’ for 6/6. Pozzo elked both with Oko, turning them into a 9/9’s without flying to stay alive. But it wasn’t enough

Bursavich couldn’t keep the momentum going, though. Pozzo was in the semifinals.

Andrew Cuneo aggressively went wide during days one and two with his Selesnya Adventure deck. But without Edgewall Innkeeper and his token engines, the deck was weak. Paulo Vitor Damo da Rosa was on Simic Food that included two copies of Mass Manipulation. The spell that won matches for Stráský, however, is not as effective against a battlefield gummed up with tokens.

With Cuneo and da Rosa sitting at the same table, there were over 100 Mythic Championships tournaments played between them. The first game between these veteran pros began with da Rosa quickly creating a board presence through Wicked Wolf but falling in life points to Cuneo’s attacks.

Da rosa climbed back, casting a Nissa, Who Shakes the World and a 6/6 Hydroid Krasis, followed up by a 9/9 Krasis. Cuneo only had so many answers and da Rosa won the first game.

Game two began with da Rosa dropping Oko on turn two and a slow start from Cuneo. Just like game one, Cuneo didn’t have enough answers and da Rosa was up 2-0 in the match.

Cuneo took game three, but he still needed two more wins in a row to make it into the semifinals. And game four kicked off with an Edgewall Innkeeper to draw six extra cards by turn four. Da Rosa responded the only way he could: by elking the Innkeeper with Oko.

The advantage was Cuneo’s throughout the length of the game. He finished da Rosa off with an amazing attack, and it would all come down to game five.

Despite the game four loss, Paulo Vitor Damo da Rosa wasn’t giving up. He immediately took advantage of his draws and went on the aggressive, leaving Cuneo at two life.

It wasn’t meant to be for the Adventure decks—Food triumphed and da Rosa advanced to the semifinals at Mythic Championship VI.

Here were the four Magic players and their decks heading into the semifinals at Mythic Championship VI.