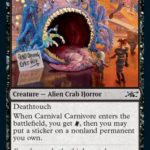 Unfinity is set to release on Oct. 7 following a significant delay from its previous release date on April 1.

Un- sets are known for having wild mechanics that won’t work in a normal Magic context, but it has also acted as a testing ground. The first dice-rolling cards were in Unglued then eventually made it to a main expansion in Adventures in the Forgotten Realms.

Unfinity is introducing a sticker mechanic, something that lead designer Mark Rosewater has talked about in the past as a possibility. Cards in Unfinity can five you tickets that can be redeemed and allow you to place reusable stickers on permanents you control.

Sticker sheets can give creatures a keyword like Exalted, modify the power and toughness, or changes the card’s art or name. Of the 48 stickers sheets in Unfinity, you may include 10 different sticker sheets in your deck’s “sticker sheet sideboard.” These cards do not count toward your main or sideboard card number.

Before the game, you pick three of the 10 sheets at random, and stickers from those sheets are available to you throughout the game.

Stickers are removed when they move to zones that involve hidden information like the deck or hand.

Other potential mechanics are words and art matters alongside another return of dice-rolling, which is quickly becoming a staple of un-sets.

Magar of the Magic Strings

This is an interesting BR commander that allows you to cast Instant and Sorcery cards from the graveyard while also generating battlefield presence with 3/3 Creatures. It can be difficult to get going because the 3/3s do need to deal combat damage to a player. If you can tack on evasion to the Creatures it can become an effective way to overwhelm the opponents.

First off, sticker kicker is a hilarious name. It’s also a powerful ability. It can generate additional stickers and apply buffs to Creatures as they enter the battlefield. This will be a staple Uncommon in a sticker-focused build and since it’s colorless, it’ll be easy to slot into any color combination. A 2/3 is also a solid body that can block early attacks.

This is fine. It’s a decent deck filler in Limited that gives you a ticket and is a formidable blocker. Deathtouch allows it to trade up for an opponent’s big Mythic Rare bomb. It could end up being playable depending on how important getting a ticket is in this format.

Alongside these eternal-legal cards, three acorn cards were revealed showing some of the most interesting designs to appear in an -un set. These cards are not legal in eternal formats, but if Commander players asked their playgroups they can usually use the cards on the basis of Rule 0.

Modal spells are powerful because you can pick the best option for a given situation. Far Out is a strong Mythic Rare that increases the power of modal spells. Allowing you to pick multiple modes breaks the intended value of these cards. Far Out is a tough first pick, but if it works out it can provide game-winning value in Limited.

Here’s a list of things that can become a Creature in Magic thanks to Animate Object: Soda can, vacuum, chicken tender, another Magic card, and a television.

This card is great if only for the ridiculous scenarios it puts you in. It’s a decent uncommon that gives you seven tickers and makes the inanimate object customizable. The versatility Animate Object provides could be valuable in Limited. The stickers you choose can be the best choices for the situation.

Angelic Harold is a signpost Uncommon that encourages players to play cards with three or more words in their name. This is an easy enough card to build around and buffs cards with lengthy names by +1/+1.

U/W generally has access to flying in Limited sets which is one of the most powerful kinds of evasion in Magic.