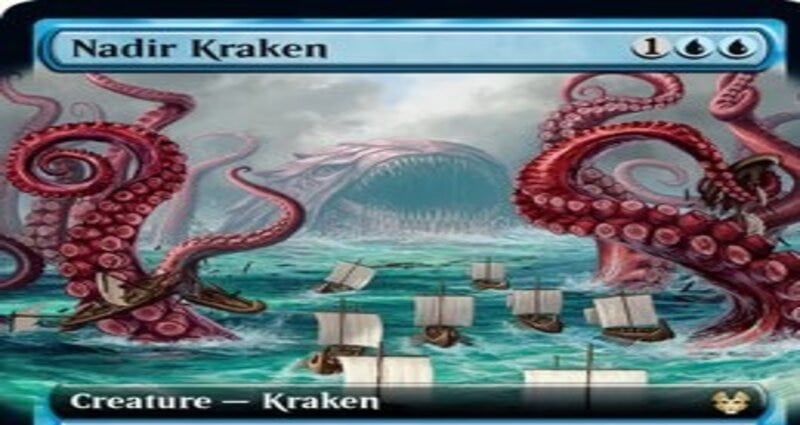 MTG’s Theros: Beyond Death (THB) spoilers continue to roll out today with the reveal of a powerful creature in the Limited format, Nadir Kraken.

Similar to Wildborn Preserver from Throne of Eldraine, Nadir Kraken takes things a step further by also creating a 1/1 tentacle creature token for every mana paid upon a card drawn.

Nadir Kraken is a first pick in a THB Booster Draft since it’s able to gum up a board quickly while gaining +1/+1 counters on itself. It’ll have some potential in Standard Constructed, too.

An Izzet Burn-Draw deck already exists, using The Royal Scions, Improbable Alliance, Irencrag Pyromancer, and Niv-Mizzet Parun. Nadir Kraken could replace Crackling Drake in the deck or be added to the sideboard for aggressive matchups.

There’s also the possibility of the formation of a new deck that uses the THB spoiler Serpent of Yawning Depths. But it’s still too early in the preview season to know if such a build would work.

The Magic community doesn’t doubt that Nadir Kraken will have a major impact on THB Booster Draft, though. The Kraken’s potential is unlimited since it’s able to start gumming up the board and increasing in power during a normal draw step.

“A+ for sure,” a Reddit user said. “This will be THE limited card in this set. Kill it straight away or die.”

A prerelease for Theros: Beyond Death is set for Jan. 17 to 19. The official release of THB will take place on Jan. 24.