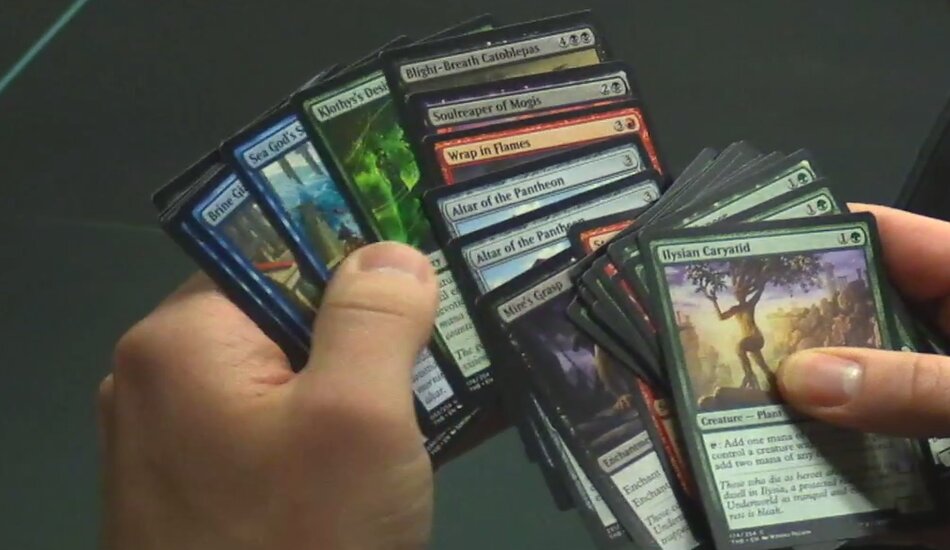 For the first time in Magic history, competitors were only given two days to prepare for the Theros: Beyond Death (THB) Booster Draft. It was also the first time new THB cards were played competitively in Magic, prior to the set’s digital release on Jan. 16 and official launch on Jan. 24.

The MTG Team Series Final was different than a normal Booster Draft. Each team was broken up into two sub-teams with three players from each team at a draft table. A winning team was determined via one team winning both sub-drafts. If each team recorded a sub-draft win, then the two victorious sub-draft teams would face off in a third THB draft.

After drafting the teams had time to converse and determine what colors their opponents were playing. Some of the predictions were correct, but both teams read Jon Finkle and Andrea Mengucci incorrectly. And ironically, they were paired against one another.

The first feature match, however, was between Lee Shi Tian (RG) against Paul Rietzl (URb). Rietzl aggressively attacked Tian with a Michevious Chimera on the battlefield, winning game one quickly. Lee began game two strong, filling his graveyard for the Escape mechanic while eating away at Rietzl’s life total. Rietzl couldn’t recover, and it came down to game three.

Matt Sperling (WG) was also battling Kelvin Chew (UG) in the first THB sub-draft. Sperling wasn’t too happy with his draft and Chew pumped up a creature to finish him off during the first game. Chew dropped a Shimmerwing Chimera and Eutropia the Twice-Favored during game two to claim the match victory and the first match win for Team Hareruya Sword.

It came down to the match between Andrew Cuneo (GWu) against Jérémy Dezani (BW) in determining the team victor in the first sub-draft. Cuneo won the first game and started game two with the advantage. Dezani slowed down Cuneo with a Dreadful Apathy and took the lead with multiple Sunmane Pegasus attacks. Dezani then played Rise to Glory, bringing back his Kunoros, Hound of Athreos from the graveyard. And with a game two win, Dezani forced a game three against Cuneo.

On the third table was Huey Jensen against Javier Dominguez who swept Jensen, earning Team Hareuya Sword their first match win in the THB second sub-draft.

Reid Duke (RG) was paired against Grzegorz ‘Urlich’ Kowalski (RG) in the first feature match. Kowalski dropped a Nessian Boar against Duke who had nothing on the battlefield and began eating away at Duke’s deck. Duke kept dropping blockers but it wasn’t enough to win the first game.

Duke came back in game two, however, forcing a game three. And he continued the beat down against Kowalski to win the match.

The second feature match was between Andrea Mengucci (BG) against Jon Finkel (UW). Mengucci began game one by flooding the board with creatures but Finkel dropped Shatter the Sky to wipe the battlefield. But Mengucci has a response, using Escape to bring Chainweb Aracnir back to the battlefield.

And after flooding out on mana, Finkel finally found his second copy of Shatter the Sky to sweep the board again with only three life points left. But it wasn’t enough and Mengucci earned a game one win after casting Chainweb Aracnir with Escape once again.

With each team having a win in the second THB sub-draft round, it all came down to game two between Finkel and Mengucci. Finkel fell quickly behind but managed to stay alive despite Mengucci flooding the battlefield with creatures. The board stalled out, however, until Mengucci played a Final Death to open the path for all his creatures to attack.

Each team won a sub-draft round, forcing another draft and match play to determine a Team Series champion. The first feature match was between Mengucci (BW) and Rietzl (UW). Apparently enjoying the Escape mechanic, Mengucci dropped a Tymaret of the Dead early on with a host of zombie attackers, winning the first game quickly.

Rietzl completely changed his deck for game two, milling out Mengucci with Sweet Oblivion for the win.

The second feature match was between Dominguez (GB) against Sperling (BR). Dominguez also favored the Escape mechanic, dropping a The Binding of the Titans and a Nyxborn Colossus. But it wasn’t enough—Sperling won the first game. Dominguez rebounded in game two with a win.

On the third table was Kowalski (BGr) against Cuneo (UR), with Cuneo earning the first game win. The second game was close, as both players dwindled in life points below 10. But Kowalski played the demon Nightmare Shephard and evened the match out at 1-1. And Kowalski would go on to win game three as well.

The win by Kowalski put the pressure on Ultimate Guard Pro Team members Rietzl or Sperling to tie the match round up at 1-1. But in the match between Mengucci and Rietzl, Megu beat Rietzl in game three. And with the win by Mengucci, Team Hareruya Sword claims the Team Series championship.