A slate of summer releases was highlighted during Weekly MTG, giving an insight into the next few months of Magic: The Gathering products.

Wizards of the Coast revealed more information on the upcoming Universes Beyond collaboration with Warhammer 40,000. This news was followed by information about two of the game’s summer sets: Dominaria United and Double Masters 2022.

Double Masters is the return of masters sets to the release calendar. Masters sets are sets with entirely reprints. The twist with Double Masters 2022 is that each pack contains two Rare or Mythic Rare cards and two foils. The original Double Masters was released in August 2020.

Previews for Double Masters 2022 start on June 16 and continue through June 24. Prerelease week is set for July 1 to 7 with a global release on July 8. The reprint set comes with draft and collectors boosters. Every Rare and Mythic Rare comes with a foil etched treatment.

Since each card is a reprint, many will include new art and border treatments alongside versions of the cards with reprint art. There were five cards revealed as a part of Double Masters 2022. 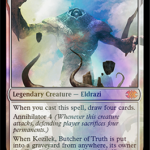 Weathered Wayfarer and Bring to Light will have promo versions available at WPN Premium stores during prerelease events.

Dominaria United is still five months away, but Wizards did provide some information on the game’s return to its original setting. Prerelease week is scheduled for Sept. 2 to 8. A global tabletop release for Dominaira United is set for Sept. 9.

More information will come later in the summer but Dominaria United will start a multi-set storyline with multiverse consequences.