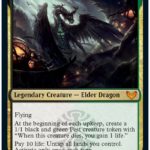 The Standard-legal set Strixhaven: School of Mages officially launched on April 23, showcasing five colleges. And two cards from the set have maintained a value over $10.

Using enemy color pairs connected to the five colleges of Strixhaven University, the STX set has created new meta opportunities across multiple Magic formats. Unlike previous MTG Standard-legal set releases, only a few cards were worth money at the time of release.

Cards like Beledros Witherbloom have impacted the Commander format, ranking it as the STX card worth the most money. Since the set’s launch, only two cards remain valued above $10. Standard rotation 2021 didn’t have a major effect on the two cards but they did drop more in value with the release of Innistrad: Crimson Vow (VOW).

Here are the top six MTG Strixhaven cards worth money and ones that investors should keep an eye on.

Beledros Witherbloom was priced at around $16 but has since fallen to around $12.50 since the launch of VOW.

Lilianna returns as a planeswalker in STX, using the mechanic Magecraft. The professor at Strixhaven University has been used in various Standard Constructed builds, along with several Commander decks. The legendary professor was once almost $30 but fell to around $12 leading up to the Standard 2021 fall rotation.

Following the release of VOW, Professor Onyx has remained at a value between $11 and $12. Should Mono-Black Control become a top-tier meta deck in Standard following the Innistrad Championship, Professor Onyx could take over as the STX card worth the most money.

Once priced as low as $2, Prismari Command began to rise in value around the middle of August. The Instant UR spell peaked post-rotation at almost $26 but has fallen since then despite being a key card within the Izzet Control builds.

The release of VOW created new builds that can challenge Alrund Ephiphany Izzet decks, dropping Prismari Comand to around $7. Depending on the meta at the Innistrad Championship, the Izzet Instant could boost in price back to around $10.

Wandering Archaic is a Rare Avatar that’s seeing gameplay in the Commander format. The Avatar maintained its value leading up to the launch of STX, priced at around $11. Following the launch of MID, Wandering Archaic dropped under $10 and is valued at around $7. The Avatar creature will likely maintain its value unless it gets replaced within the Commander format.

The cards to watch are ones that aren’t worth more than a few dollars anymore but have the potential to rise in value under the right circumstances and meta.

Galazeth Prismari is an Elder Dragon that has its own Commander deck and was once priced at around $14. Despite Galazeth Prismari’s popularity, the dragon dipped in value around May and never recovered.

With the launch of MID, Galazeth Prismari was priced around $7 and has since fallen to around $5. Should an Izzet Dragon build in Standard become a top-tier meta deck, the elder dragon would likely rise in value to around $10.

Tokens have fallen out of the Standard meta but have a chance to become popular again with the addition of Kaya, Geist Hunter. Sedgemoor Witch has fluctuated between $4 and $8 since the 2021 Standard rotation. She’s valued at around $3 with the launch of VOW but could pop back off the release of Kamigawa: Neon Dynasty.