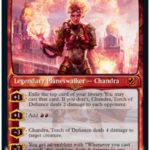 There are a total of eight cards included in the Chandra Signature Spellbox set, with one of those eight being a premium foil version chosen at random. Each of the eight cards is a reprint from previous Magic sets. The set will release on June 26 at local game stores and should be priced at around $19.99.

First introduced in 2018, Signature Spellbox box sets feature cards themed around a central planeswalker in Magic. Previous versions highlighted Jace and Gideon, with the newest set featuring Chandra, Torch of Defiance. The series evolved out of From the Vault with a goal of reprinting versions of cards players wanted.

“[Signature Spellbox] was conceived as a spiritual successor to From the Vault, that could use unique frames to make cool, awesome versions of cards people want,” Gavin Verhey said in the 2018 state of product design announcement.

The single-copy reprints contained within Signature Spellbox are ideal for Commander players since only one copy of a card is used in that format. All of the reprints are legal to play in formats based on the original set it was printed in.

The Chandra MTG Signature Spellbox set will be released in local game stores on June 26.