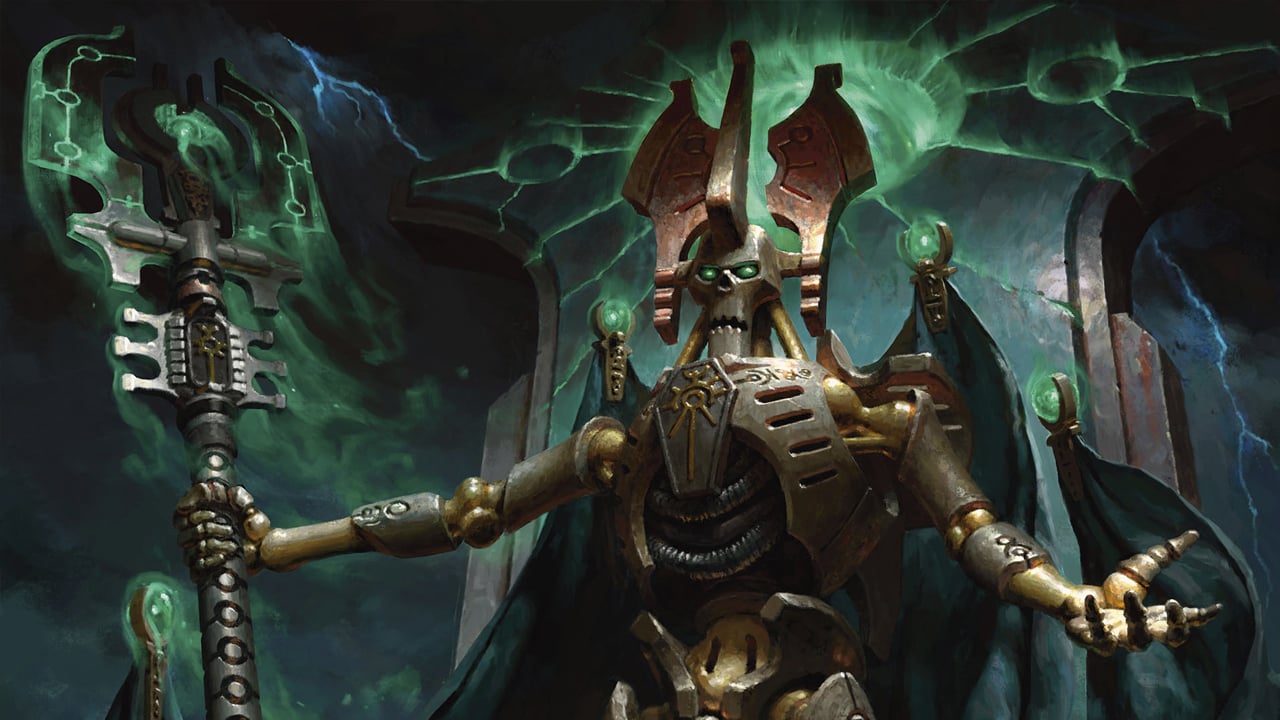 The grimdark world of Warhammer 40,000 is coming to Magic: The Gathering in a Universes Beyond release featuring four reconstructed Commander decks full of new cards that capture the flavor of some of Warhammer‘s biggest factions.

Releasing on Oct. 7, each precon introduces new cards and fresh reprints in a pick-up-and-play package. One of the factions showcased in the release is one of Warhammer‘s oldest: the Necrons.

This ancient mechanical species re-emerged in the 41st millennium to assert its control over the galaxy and revive the Necron empire.

The Necron Dynasties precon is a Mono-Black Artifact list, a unique archetype supported in this Universes Beyond release. There aren’t any dedicated Artifact commanders in the color, outside of some fringe Treasure-based strategies.

Szarekh, the Silent King is the face card for the Necron Dynasties precon and rewards the players for filling up their graveyard with Artifact cards. This four-mana Creature mills you when it attacks, then you may return an Artifact or Vehicle milled this way into your hand. This ability is decent, but relying on your Commander to attack to gain incremental value is a tough ask even if Szarekh does have flying.

The secondary commander included in the Necron Dynasties precon is an excellent option to lead the deck. Imotekh the Stormlord is a powerful four-mana Creature with two key abilities. It acts as token generation and buffs an attacking Creature.

Both included commanders aren’t going to blitz the opponents. They are both value engines that will slowly take over the game if they stick around for several turns. This is fitting with how Necrons play in Warhammer 40k.

On the tabletop, Necrons are an excellent attrition army. They are an army that refuses to die and will slowly grind out the game. The flavor is on point in the Magic release with a resilient army of Artifacts that can play from the graveyard.

Winning with the Necron Dynasties list is done in a variety of ways. This nonlinear deck challenges the pilot to find the correct lines to close out the match. The core of the strategy will come from playing Artifacts, sacrificing them for value, then getting them back from the graveyard.

Necron Dynasties is filled with strong payoffs for the graveyard strategy. A suite of unearth Creature cards will pressure the opponents and force them to commit removal spells. Cards like Hexmark Destroyer and Royal Warden will consistently generate value throughout the game.

A go-wide token strategy is supported with plenty of token generation included in the precon. In the right circumstances, the game can be won by going tall. Shard of the Nightbringer and Tomb Blade are hefty Creatures that can end the game quickly. A reprint of Cranial Plating gives the list an exceptional Equipment that can give you a commander damage victory.